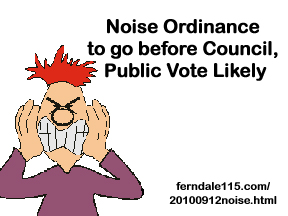 West Troy Street resident Sherry Wells has filed ordinance initiative petitions to amend Sec. 2-11 of the City Code of Ordinances, heightening restrictions on noise in the City.   The petitions contain approximately 266 signatures, which are in the process of being validated by the City Clerk’s Office.

If the petition is presented Sept. 27, Council has until October 18 to adopt the ordinance as submitted. 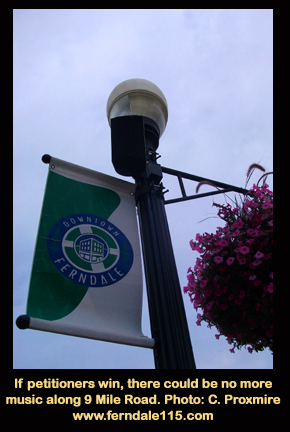 According to Wells, ten neighbors from both sides of 9 Mile took part in the signature gathering process, with signatures from all over the city. They say that noise from Downtown bars and restaurants affects their quality of life.  Wells has repeatedly called the Police with complaints about noise from Rosie O’Grady’s, although Police say that the establishment has never been in violation.

Section 2-100 to read:  "Exceeding these sound levels is prima facie evidence that such sound is in violation of this Code, but Section 2-98 is controlling.”

(a) (1) Continuous sound. No person shall cause, suffer, allow, or permit the operation of any source of sound on any property or in the public right-of-way in such a manner as to create a sound level that exceeds these sound level limits, as measured at or within the property line of the source:

Amplified Sound Reproduction Device. Such devices are prohibited outside of a fully enclosed, roofed, closed building. Additionally, if a complainant states that the rhythmic bass component from its source is disturbing within his/her residence, then the authorized city official may take sound level measurements within that residence and shall use the dB(C) weighted network. [Provisions (2), (3) and (b) remain unchanged.]

Section 2-102 (3) to read:   Parades, concerts, festivals, fairs or similar activities may be approved by the city council for up to 10 decibels above the sound pressure limits specified above.

No person shall create, assist in creating, continue or permit the continuation of any excessive or unnecessarily loud disturbance of noise of a high volume or intensity which is clearly audible and disturbs, annoys, or endangers the calm, comfort, quiet, repose, health, peace or safety of others beyond the immediate vicinity of the disturbance. Such noise disturbance shall be a violation of this article.

The lowered levels, and the manner in which they would be implemented, have many in the community worried.  “Responding to this issue should be thought out carefully with all the perspectives involved, including residents, businesses, consumers, government and nonprofits.  An amendment to this ordinance will impact the entire city, not just a single business or resident,” said DDA Executive Director Cristina Sheppard-Decius.  “We live in an urban community and the normal decibel levels from traffic and density, typically around 85dB, is higher than a suburban or rural area.”

According to Police Chief Timothy Collins, the wording takes away his discretion in whether or not to issue noise violations against homes or businesses.

On July 23, 2010 the DDA sat down with Mayor Craig Covey, Councilperson Melanie Piana, business owners and residents to discuss the petition and other options for dealing with the noise problem.  Sound expert Dieter Geisa gave information about noise levels, and Police Chief Timothy Collins was on hand to demonstrate sound monitoring equipment and discuss enforcement.

“Noise is a very subjective thing,” Geisa said.  “When there’s a noise that annoys me, the brain focuses on it and exaggerates it.  The meter used to measure it makes it less subjective.”  The DDA and Geisa provided information about decibel levels of noise that is commonly heard in our city.  Vehicle traffic is typically 80, a man giving a loud speech is about 75, normal conversation is 65-70, and a lawn mower is 90.  “If you want 65 DBA it’s physically impossible.  Whole areas of the city have background noise that is louder than that.”

Ferndale resident Francine Hachem was one of those who signed the petition.  While she agrees that noise can be a problem Downtown, she didn’t realize how restrictive the petition was.  “I don’t think people realize when they’re signing this how low the numbers actually are,” she said.  “I wouldn’t have signed it if I knew, and I think people need to realize what it is they are signing.”

"I'm very leery of this kind of proposal going before the voters in Ferndale, especially if we are forced to hold it as a special election, which could cost the city thousands of dollars.  The voters elect their city council to make these kinds of decisions, and the council appoints professional staff to manage the city on an ongoing basis.  Rather than wait for the city to act on recommendations from the DDA and staff, a tiny group of disgruntled residents are trying to take a giant step backward and change the entire nature of our downtown. This ordinance is very poorly written, and in the unlikely case the voters pass the proposal, it could literally shut down once again our downtown.  It would in effect ban music downtown, including the backround music from our DDA, music from patios, and even indoor music during summer months.  It could affect events such as the Blues Festival, the DreamCruise, the Pridefest, and the ArtFairs.  It threatens to shut down sound downtown after 7 pm.  Everything that so many of worked for over the past two decades to transform Ferndale into a thriving, popular, and hip city could go for naught."

Wells has made several complaints to the Police and to City Council about the noise and vibrations from the bass reaching her home, which is just off the corner of 9 mile and West Troy.  “Not all downtowns are equal,” Wells said. “Ferndale has merely a few blocks on each side of one main intersection. The outdoor amplified sound ‘disturbs, annoys, or endangers the calm, comfort, quiet, repose, health, peace or safety of others beyond the immediate vicinity of the disturbance.’ And beyond that immediate vicinity are people trying to work, play and sleep on their own property.  Our quaintly tiny downtown was created for all, as walkable shopping and leisure activities (2 movie houses, a bowling alley) instead of at least 22 bars for a much smaller age range.”

Her displeasure with the noise from the bars is amplified by the annoyance of non-residents walking down the street, people speaking loudly as they go to their cars in the West Troy parking lot and on the various side streets, and intoxicated people misbehaving.

For more information on the Noise meeting held in July, go to http://www.ferndale115.com/20100724noise.html.

NOTE:  An earlier version of this article reported a list of typical day-to-day activities that would be restricted by this ordinance.  While we believe that information was correct based on the meetings that we have attended, we are leaving that part out until we can find the exact meeting/source that information came from.  Please be patient as we will update that information as we have it. - editor.