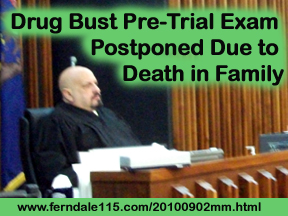 Drug Bust Pre-Trial Exam Postponed Due to Death in Family

Judge Joseph Longo today postponed the pre-trial exam for seven defendants in the Clinical Relief drug raid case because of a death in the owners’ family, and to allow more time for some of the defendants to retain council.

Sixty-seven year old Sal Argo had hip replacement surgery on Tuesday, and died of a massive heart attack just an hour and a half before his two sons and 70-year-old wife were scheduled to appear in 43rd District Court on drug trafficking charges.

Nicholas and Anthony Argo are owners of Clinical Relief, the medical marijuana facility that was raided by Oakland County Narcotics Enforcement on Aug. 25, 2010 (http://www.ferndale115.com/20100826clinic.html), and their mother Barbara Argo was a receptionist there.  They, along with co-owner Matthew Curtis, and employees Stacey Ellenbrook, Ryan Fleissner and Barbara Johnson have all been charged with drug-related offenses stemming from what the Oakland County Prosecutor says were marijuana sales outside of the realm of Michigan’s medical marijuana law.

Bobby Lorraine, a family friend from Colorado, said that the death was a shock that added to the stress of the raid and the loss of business.  “Sal was an unbelievably engaging and charming man.  He was a football and wrestling coach for many years in Lake Orion, with lots of kids that he mentored.  It’s sad that he left the world with these circumstances going on.”  Sal and Barbara’s home in Lake Orion was raided, as were the homes of other employees.  “Seeing the family go through this loss puts things in perspective.  It makes all these court dealings seem unimportant.  Yet it is so real.  I hope they don’t suffer any incarceration over a law that isn’t clear yet.”

Nicholas, Anthony and Barbara were excused from the hearing due to the death, and the pre-trial exam has been postponed approximately three weeks, with the date to be determined once the various attorneys can coordinate their availability.

Clinical Relief re-opened the day after the raid, but is now closed while the family mourns.  “There is a lot of stress with the death in the family,” said co-owner Curtis.  “We’re closed because of that, and until we know from the courts what exactly we’re in trouble for.”  He said that they are looking into setting up an off-site clinic, so that patients can feel safe going to their appointments. The doctor at the clinic has not been charged with any crime.

Bob Redden of Ferndale is a medical marijuana card holder, who is currently fighting a drug charge at the State Supreme Court level.  He is a frequent visitor to Clinical Relief and other facilities throughout the state, where he goes to show support and share information.  Though he does not get his medical supply through Clinical Relief, he is supportive of the work they do.  “I’m a member of the ASA, [Americans for Safe Access] and we want a safe place where we can get medication.  The courts put alcohol the same as marijuana as a restriction and they are two different things.  Alcohol is not a medicine.  Marijuana is.”

The investigation into Clinical Relief, and another facility in Waterford that was busted the same day, was conducted by Oakland County.  The City of Ferndale has been progressively welcoming medical marijuana facilities.  Last Monday they repealed a temporary moratorium on such facilities and passed zoning requirements that limit where facilities can open.  They also require a special use permit, which will ensure that facilities meet environmental standards.

Former Ferndale Mayor Bob Porter, who has worked with the City in crafting medical marijuana policy, says that the case against Clinical Relief worries him for a couple of reasons.  “The law just isn’t clear, and I’m worried that this case will stop the availability completely while the State figures things out.  There are people who need this medicine, and I’d hate to see that get messed up because of this.  If the clinic was doing the things the Prosecutor says, then it could ruin it for everyone.  You don’t sell pot to people without cards.  If you sell pot to an undercover agent without asking for a card, you’re going to get in trouble.”

Porter said he was surprised that doctors in the state have not been charged.  “One of the problems is that doctors are issuing cards for any kind of reason.  People come in and say their elbow hurts and they can get a card.  I think that at some point they’re going to start questioning those kinds of clinics, making sure that doctors are really examining patients and doing full medical work-ups, and preventing people from getting cards that don’t really need them.

‘There are people out there who are on the fence about this issue.  And people abusing the system hurts public opinion also.  The focus needs to be on sick people that need help that they can’t get from any other kind of medicine.”