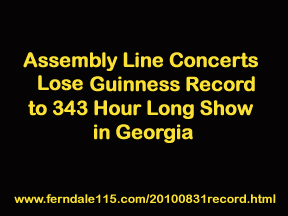 The 313 hour, “Assembly Line II, Second Shift” concert held at a small, unpretentious cafe in this downtown community nestled on Detroit’s northern border had all the makings of laying claim to the Guinness world record for concert longevity. As its name implies, this was the second effort in what appears to have become an annual event at AJ’s Music Cafe. The Second Shift was an effort that AJ O’Neil, owner of the cafe that bears his name, saw as a way to again focus attention on the domestic manufacturing and automotive industry and to keep his Guinness -record first Assembly Line Concert in his home town of Detroit.

“Our first attempt in 2009 was incredibly difficult at 288 hours,” O’Neil said. “But we wanted to again focus attention on the fact that we Michiganians have the determination, grit and talent to create positive attention to the fact that our staple product, cars, is something that the entire nation should realize is a part of them.” he continued. “The concert served as a backdrop to our auto and manufacturing industry, focusing on the great products and people behind it,” O’Neil said.

This year’s 313 -hour event, Second Shift ended April 1st when the last of over 300 bands took the stage at AJ’s for the finale in a non-stop cascade of musical acts spanning 13 days. Documentation was compiled and sent to Guinness in England. O’Neil anticipated the 4-6 month wait for official word would come, just had it had a year earlier at the end of August. This year, word came from an IPod, showing O’Neil a Guinness blog site:

Good friend and Second Shift Production Chief Alan Benchich, a retired GM and UAW union worker who lives in Ferndale brought news of the new record. “My first reaction was that I was stunned,” O’Neil said. “We worked so hard and we already had the record.  I didn’t realize that there were people crazier than we are out there,” he joked.

Nevertheless, quickly, O’Neil turned his thoughts to resolve and opportunity.

“I thought about all that we had done, how many dedicated people were behind us and how much we had accomplished with so little to work with,” O’Neil said. We had some great sponsors in GM-UAW, GreenPath Debt Solutions, the Michigan Credit Union League and scores of local small businesses. But our total commitment for sponsorship was nowhere near the amount needed to generate this event into a world-class showcase that it deserves.” O’Neil said.

“As we didn’t have the funds to compete with the Atlanta effort, I do give them credit for pulling it off...I know too well what it takes. Bravo, Atlanta! However, I promise the city of Detroit, the state of Michigan and our entire manufacturing and auto industry that I will do everything I can to attract the commitment that will bring our effort to the next level,” O’Neil vowed.

It appeared that the entire city of Saint John’s Creek, a northeasterrn suburb of Atlanta got behind the effort at the Red Baron Pizza Pub. A Guinness adjudicator, priced at roughly $6,000.00 per day is pictured with organizers in the Guinness blog for the 343-plus hour event, which was given immediate Guinness recognition.

“It’s hard for so many people out here, I can certainly understand that, “So many of us struggle to keep our businesses afloat, “O’Neil stated. “You need customers to have a business and people need jobs and income to become customers. The Assembly Line concert(s) are my effort to remind us that we are all in this together. Cars are the backbone of our community. We have barbershops, salons, cafes, schools...because of our automotive industry. I want everyone to remember that if you are going to buy a car, buy a car that’s Detroit-born and manufactured.”

A relatively small but dedicated band of helpers, laid-off and retired auto workers among them, accomplished feats of extraordinary means. Roz Cooperman a professional production company owner with years of experience, well acquainted with the automotive industry helped bring the Second Shift to a greater level of expertise. “It started, as many things do, when Roz came into the cafe and declared her donation of time, commitment and help, just as so many others had done, O’Neil said.

Always up against the challenges of finding enough resources and people to put on an event of this magnitude, coupled with the rigors of 60-70 hour work -weeks to keep his café viable, O’Neil never shied away from attempting the record.

“I know we can take the record back. The people in Georgia that broke our record and their vast support system see the value in this record. They earned it away from us. I hope the leaders of our business community and the Detroit auto world will contact me so we can unify and get this done next year,” O’Neil added. “We really are all in this together,” he said.