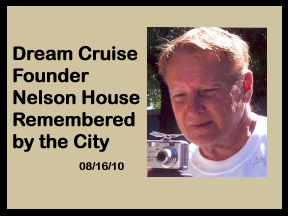 Dream Cruise Founder Nelson House lost a battle with Cancer, which took his life on Thursday August 12, 2010 at 11:05 am.  House was a longtime, active member of the Ferndale community who will be most remembered for originating the Dream Cruise idea.  On August 9, 2010, the Ferndale City Council adopted a resolution dedicating Dream Cruise to House. 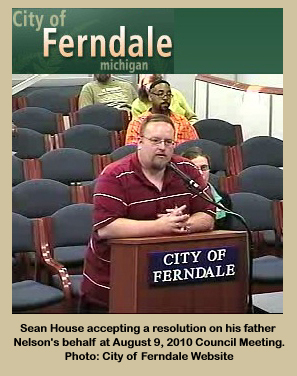 The following resolution was supported unanimously:

In 1994 Ferndale resident Nelson House had the inspiration for an event to raise funds for a children’s soccer field. He remembered the summer nights, during the ‘50s and ‘60s, when young adults would be driving their American-made cars eager to be seen cruising along Woodward Avenue.

With a determination to make a difference, Mr. House and a group of volunteers created what is now formally known as the Woodward Dream Cruise in the summer of 1995. They estimated a number of 30,000 to 40,000 spectators and car enthusiasts would attend, but to their surprise an estimated 250,000 people participated.

The reputation of the Woodward Dream Cruise has spread beyond the Detroit metropolitan area and the state of Michigan. Car enthusiasts and spectators now come from around the world to participate in the world’s largest one day auto event.

Mr. House’s inspiration to help the youth in our community has turned into a showcase event that promotes our City as well as the others along Woodward Avenue. When it is said that Ferndale is “Where the Dream Began,” it must be stressed that Nelson House is the man who dreamed it.

NOW THEREFORE BE IT RESOLVED that we, Ferndale elected officials, do hereby express our community’s deep appreciation to Nelson House for his dedication to the City of Ferndale and we recognize his effort to raise funds for a youth soccer field that has culminated in the largest one day auto event in the world. It with great pride that we officially dedicate this year’s event to Dream Cruise founder Nelson House.

House’s funeral was held at Spaulding and Curtain on August 14, 2010.  House is survived by wife Venetta, children Sean (Tessica), Derek (Andrea) and Sandra (Gene Nieman, as well as seven brothers and sisters and four grandchildren. 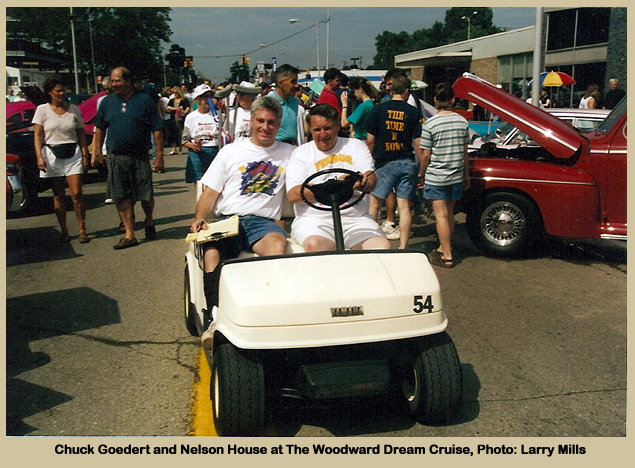