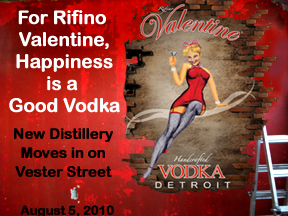 For Rifino Valentine, Happiness is a Good Vodka:

After a 13 year career trading stock on Wall Street, Rifino Valentine had a revelation.  “I had one of those moments where I said ‘this is what you’re doing with your life, trading on Wall Street?’ I knew I didn’t want to do this forever, so I quit.”

That was four years ago.  And now as he prepares to open his own vodka distillery and tasting room here in Ferndale, Valentine says that creating Valentine Vodka is “the best decision I could have made for my life.” 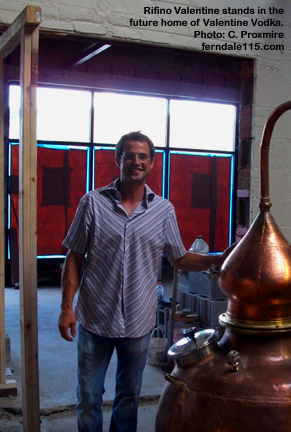 He became interested in brewing beer in college, which ultimately led to a passion for micro-distilling small-batch, hand-crafted spirits. After four years of intensive study, training and planning, Valentine Vodka was born.  Valentine said he was also excited about the idea of building up a high-quality brand, which is reminiscent of prohibition-era, speakeasy culture.  A 1920s era pinup girl graces the label.

Most vodkas are made with a continuous process, where sugars and glycerol are added to make it consistent and “smooth,” but hand-crafted batches can develop their own character. Valentine Vodka uses only Michigan-grown wheat, barley and corn, and the batches are kept separate from start to finish, with approximately 400 liters made at a time.  The process takes 2 ½-3 weeks from gain to bottle.

Distilling is done with equipment leased from Michigan State University’s Distilling Program, and the final filtration process is done in large copper vats which will be seen by visitors to the Ferndale tasting room.

“The process is not revolutionary at all, but most places don’t do it this way any more.  Most vodka is made with a continuous process and is all regulated by computers, but computers can’t tell you when something tastes just right.” 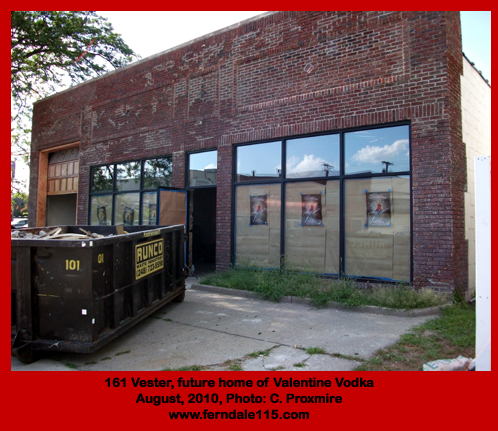 Valentine Vodka’s distillery and tasting room are expected to open later this year at 161 Vester, a building that formerly housed a pool table manufacturer.  They are maintaining as many historical features as possible, including an old wooden garage door, and brick walls on the inside. They would like to be able to repaint the pool table sign on the side of the building, although that is currently not permissible by city code.

The tasting room will feature Valentine Vodka for sale by the bottle, as well as in high-quality mixed drinks.  They will also feature special blends made with locally-crafted mead by B. Nektar.

“I love what Brad [Dahlhofer, founder of B. Nektar] is doing down there with having a local, specialty focus to his mead.  I want to work with others who are passionate about what they do, and take the time to do things right.  It doesn’t matter what you’re making – just do it well.”

For more information about Valentine Vodka, check out their website - http://www.valentinevodka.com. 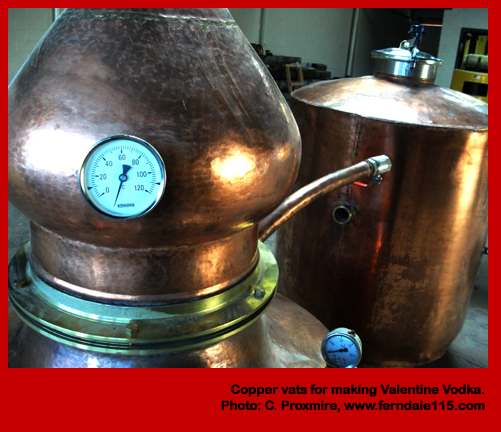