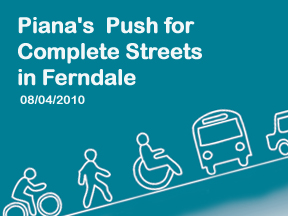 As she rides the streets of Ferndale, often wearing a business skirt and a nice thick helmet, councilperson Melanie Piana appreciates the ways that Ferndale welcomes pedestrians and bikers, and looks for ways to make the city even more multi-modal friendly.

This month she will be giving a presentation to City Council on a Complete Streets Ordinance that creates a non-motorized plan for the city. Council is expected to hire a consultant to work with groups like the Downtown Development Authority (DDA), The Department of Public Works (DPW) and the Recreation Department to combine all ideas into a master plan to make the city safer and more accessible.  Piana will be presenting ideas that other communities have used to attract more non-automobile traffic, including making crosswalks and bike lanes more visible, and working with other communities to support bike traffic along Woodward.

And on Tuesday, Aug. 10, 6:30pm at the Kulick Center Piana will be the guest speaker at the Ferndale Environmental Sustainability Comission’s Green Tuesday seminar, where she will also be discussing the plans.  The class will also feature biking tips from Continental Bike Shop.

Once the ordinance is passed, there will also be more public outreach and input sessions.

“In the past a lot of how we planned our community was with cars being more of a priority than people,” Piana said.  “How do we create a community for people?  How do we make streets safe for people.”  She says Ferndale has already done more than many area communities by installing bike lanes, and by reducing lanes of traffic along W. 9 Mile to encourage slower driving and more interest in the downtown stores.

“A lot of modeling has been done based on traffic congestion – widening roads etc, and not taking into account busses, trains, and pedestrian/bike traffic,” she said.  “Ferndale has done better, but we need a concrete plan.”

“It’s hard to watch, but I’ve seen pedestrians come up to a crosswalk and they react with fear just from trying to cross the street. There are ways to make drivers and pedestrians more aware.  This shouldn’t be a problem.”

Complete Streets was adopted on a state-wide basis earlier this month.  The Michigan Suburbs Alliance website explains, “Under this legislation, the Michigan Department of Transportation will be required to consider all users of our roads in all phases of road project planning, developing and constructing. The plan will also encourage local units of government to consider Complete Streets principles when updating their master plans. While Complete Streets accommodations may vary between communities, they include sidewalks, bike lanes, special bus lanes, accessible transit stops, frequent crossing opportunities and accessible pedestrian signs.  A statewide Complete Streets Advisory Council will also be formed under this legislation.”

Piana works for the Michigan Suburbs Alliance, a group whose mission is “to unite and strengthen metropolitan Detroit's mature suburbs by elevating regional cooperation, reforming public policies and innovating redevelopment strategies.”  She testified before the House Transportation Committee in May about the need for encompassing transportation policies.

She says that while several communities in the area are considering Complete Streets legislation, Ferndale could be one of the first to officially adopt it.  More than 120 jurisdictions have adopted Complete Streets policies nationwide, including over 30 in the past two years.

For more information about Complete Streets policies go to www.completestreets.org.  Or stop by the Kulick Center at 6:30 on Tuesday night (Aug. 10, 2010).