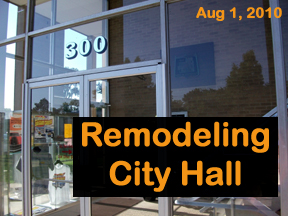 In order to efficiently serve residents and business owners while working with significantly less staff, the Ferndale City Council voted Monday (7/26/2010) to move forward with remodeling plans for City Hall.

The cost of the renovation project is capped at $447,903, and will pay for itself after three years, said City Manager Bob Bruner.  The money comes from the Public Improvement Fund, which was set aside in more fruitful years specifically for such projects.

Councilperson Michael Lennon objected to the plans, saying “I can’t vote for a half a million dollars when we just laid off police and fire.”

Mayor Craig Covey, who has vocally opposed funding large municipal building projects in the past, feels the remodeling is a good compromise.  “I’m in support of this mainly because it is bare bones.  It’s far short of what we talked about two years ago,” he said.  “Sometimes you spend a little money to save a lot.”

The plans include creating a customer service counter that will serve as a single point of contact, and a new elevator near the main entrance to make the building ADA (Americans w/Disabilities Act) compliant.  The current layout has various departments on either side of a long hallway upstairs, with other departments located in the lower level. Each department had staff to assist visitors.  With the new layout, the person behind a single counter will be able to help them with many things, while providing the other staff with more of a buffer to prevent interruptions.

Budget problems, due mainly to cuts in State revenue sharing and declines in property tax revenue, led the City to lay off employees in most departments.  The remaining employees are tasked with providing the same services with less help.

Employees who are currently downstairs, including the Community Development Department, will be moving upstairs to an open office environment behind a single service desk.  The downstairs will be closed, however there is the potential for other departments to move into the space.  It could also be rented out, used for storage, or as a home for the Court (which was located there from 1964- 1979, before moving across the street).

The back entrance will be closed to the public, and the front will have a new elevator.  “It was important to Council that City Hall have a visible public entrance on 9 Mile Road,” said Community Development Director Marsha Scheer.  “Closing the front doors is not welcome to the community.”

Ann Serafin, the Chair of the Ferndale Disability Advisory Board, spoke at the meeting on the topic of handicap accessibility, and said that coming through the side door to City Council meetings feels like entering a fine restaurant by going though the kitchen.  She also criticized the small lift, which was installed in the early 90s in response to the 1991 Americans with Disabilities Act, although the lift is not compliant with their current standards.

The new elevator will face the front lobby and open in the area now where the City Crest and gumball machines are on the wall.  The renovations are expected to take approximately two months. 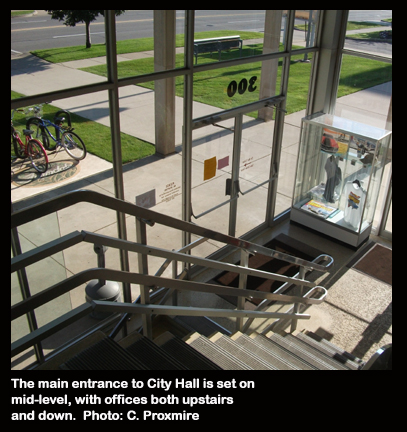 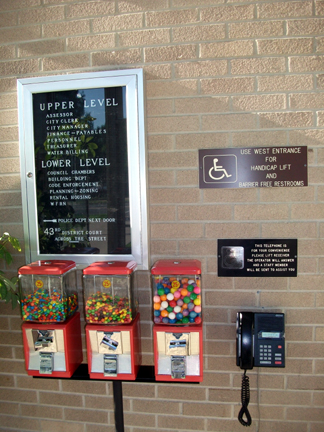 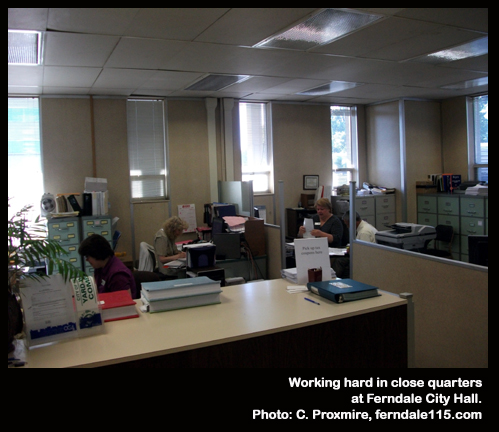 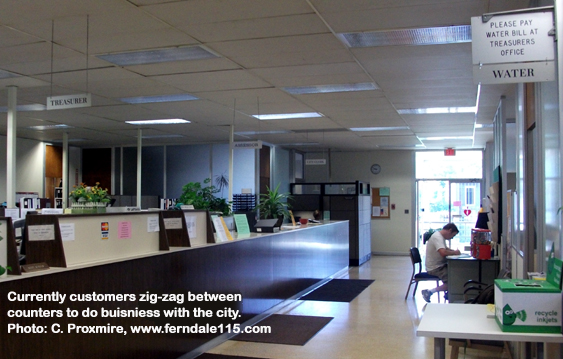