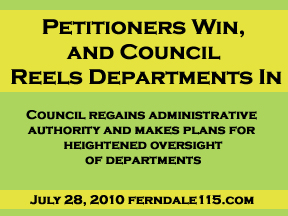 The circulators of the petition to repeal Ordinance 1094 had a bittersweet victory at the July 26, 2010 City Council meeting, with direct supervision of departments being transferred back to Council, who in turn began taking measures to better manage that control.  A memo proposing changes in how department heads communicate with the five-member Council, sparked criticism from the petition organizers.

“It’s clear that memo was in retaliation to the citizens because they stood up to them [Council],” said petition organizer Tiffani Gagne.

The scattered-distribution of power meant that during budget season when department heads did not comply with requests for information from the City Manager, he had to wait until a public meeting and ask the council to exercise their authority to request the information.

Not having the proper information hindered the budget process, and brought the Police Department publically before council on Jan. 25, 2010 to hear the paperwork request officially voted on by the five-member body.  Because of this, Council did not receive the Police Department budget numbers until nearly a month after the other departments had complied with the City Manager’s request.

This and other problems prompted Council to vote 4-1 in favor of Ordinance 1094, giving administrative responsibility to the City Manager.  (To read the other reasons behind the ordinance, see our article - http://www.ferndale115.com/20100616powershift.html).  Under the Ordinance, the City Manager would have been responsible for managing the Council-appointed department heads, which is the standard mode of government for most municipalities.  Councilperson Michael Lennon cast the dissenting vote, objecting that the change never went through committee review, and calling it a “power grab.”

Eighteen residents, led by Tom and Tiffani Gagne, circulated petitions to have the ordinance repealed.  “This effort gathered many people together.  This takes a lot of time and effort and I am very proud of the people who stepped up.  To gather 400 signatures in 22 days is a large feat,” Tiffani Gagne said.  Only 266 signatures were required, but they wanted to “send a message” to Council that the people’s voice be heard.

“We’re not necessarily opposed to a City Manager having this role,” said Gagne as she was gathering petitions from neighbors earlier this month.  “I know they do this in many cities.  But, given all that is going on with layoffs and behind the scenes conversations, this is not the way it should be done.  Timing is everything.”

Council accepted the petition, repealed Ordinance 1094, and voted to put the issue of restructuring on the ballot for November.  In the meantime, administrative duties have reverted back to the City Council, and members are taking steps to ensure more accountability from the various departments.

Councilperson Scott Galloway proposed that Council establish guidelines for appointed department heads to follow, including reports about what they are doing with their time, consistent reviewing of tasks and goals, reports similar to those they get from the City Manager about activities each week, council approval of expense reports, and establishing a system for appointee discipline.

“I agree with some of the speakers previously who said that the system worked okay for a while,” Galloway said.  “As times got tougher…the system really broke down I think over the course of the last budget talks where we had to make some very challenging decisions.  We saw repeatedly information not provided, or not provided in a timely manner, the waiting by different departments, arguing for their own budget at the expense of others without really looking at the entire picture that we have to face up here.  And frankly accountability issues with some of the department heads pointing fingers at somebody else saying ‘that person was supposed to do something, that’s not my job.’  And at this point when we’re getting into several budget cycles that are going to be as tough or tougher than the previous ones that’s not a luxury we can afford.  We need to get all the appointees rowing in one direction.”

Council members will be using the memo as a starting point to see what policies might make for more efficient governing of the department. These policies are in the discussion stage; no action was taken.  Ordinance 1094 is repealed and Council is back in charge, at least until the Charter Change is voted on in November.

To keep up with Council and other governmental news, please read our Council Report page – www.ferndale115.com/councilreport.html. 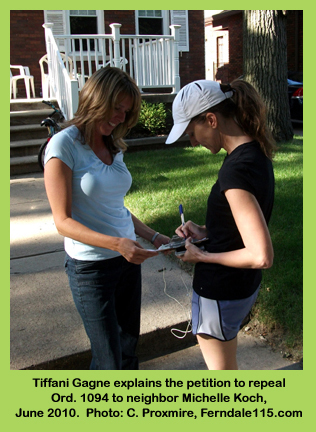