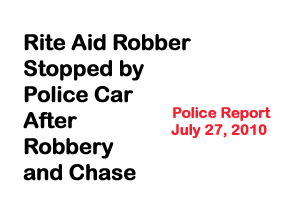 On Tuesday July 27, 2010 at shortly after 10:30 a.m., a 39 year old man entered the Rite Aid store on Woodward in Ferndale and committed an armed robbery with a handgun.

Immediately after being robbed, the victim store clerk phone police and gave a description of the suspect.

Shortly after, a Ferndale Officer spotted the suspect leaving the area in a Ford Bronco. The officer attempted to stop the man who fled through streets of Ferndale at high rates of speeds. The suspect was crashed multiple times into police cars.

The suspect made it to  8 Mile road and fled west bound, eventually cutting over the median and driving w.b. in the e.b. traffic lanes before losing control of his vehicle and crashing into a tree at 8 Mile / Picadilly. The suspect then fled on foot into Detroit, ran back northbound, and attempted to cross 8 Mile road.

He ran through traffic and was struck and knocked down by an unmarked police vehicle. The suspect was then apprehended.

He had what appeared to be minor injuries and was transported to the hospital for treatment and evaluation.

Reports are being processed and we expect to present the case to the Oakland County Prosecutor’s office tomorrow.