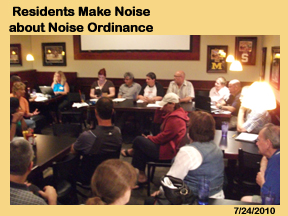 After months of noise complaints left unaddressed by City officials, a group of residents led by Sherry Wells has begun circulating a petition to place a referendum on the November ballot to amend existing Noise Ordinances No. 949 and Ordinance No. 999e, which would create a drastic change in the amount of sound permitted in the city.

Wells, who lives near Allen and West Troy with her 19 year old daughter, says that noise from Rosie O’Grady’s and other Downtown businesses is causing her family and neighbors lost sleep and health problems.  Wells began complaining to City Council after Rosie’s opened earlier this year.  Police say they have been out to Rosie’s over two dozen times to test sound levels after complaints, and each time the noise level was within the levels allowed by the current ordinance.  From July 1, 2009- June 30, 2010 Ferndale Police issued 11 noise citations, eight of which were non-commercial (most likely residential parties), and three of which were in the Downtown area but not issued to businesses.  Ticket fines are determined by the court, but the average violation was $163.

Wells and other residents – mainly from W. Troy and W. Saratoga Streets – are circulating a petition that would require decibel levels to be lowered and to prohibit outside speakers and lamplighters.  The revised ordinance contains the following provisions:

Section 2-100 to read:  "Exceeding these sound levels is prima facie evidence that such sound is in violation of this Code, but Section 2-98 is controlling.”

(a) (1) Continuous sound. No person shall cause, suffer, allow, or permit the operation of any source of sound on any property or in the public right-of-way in such a manner as to create a sound level that exceeds these sound level limits, as measured at or within the property line of the source:

Amplified Sound Reproduction Device. Such devices are prohibited outside of a fully enclosed, roofed, closed building. Additionally, if a complainant states that the rhythmic bass component from its source is disturbing within his/her residence, then the authorized city official may take sound level measurements within that residence and shall use the dB(C) weighted network. [Provisions (2), (3) and (b) remain unchanged.]

Section 2-102 (3) to read:   Parades, concerts, festivals, fairs or similar activities may be approved by the city council for up to 10 decibels above the sound pressure limits specified above.

The lowered levels, and the manner in which they would be implemented, have many in the community worried.  “Responding to this issue should be thought out carefully with all the perspectives involved, including residents, businesses, consumers, government and nonprofits.  An amendment to this ordinance will impact the entire city, not just a single business or resident,” said DDA Executive Director Cristina Sheppard-Decius.  “We live in an urban community and the normal decibel levels from traffic and density, typically around 85dB, is higher than a suburban or rural area.”

On July 23, 2010 the DDA sat down with Mayor Craig Covey, Councilperson Melanie Piana, business owners and residents to discuss the petition and other options for dealing with the noise problem.  Sound expert Dieter Geisa gave information about noise levels, and Police Chief Timothy Collins was on hand to demonstrate sound monitoring equipment and discuss enforcement.

“Noise is a very subjective thing,” Geisa said.  “When there’s a noise that annoys me, the brain focuses on it and exaggerates it.  The meter used to measure it makes sit less subjective.”  The DDA and Geisa provided information about decibel levels of noise that is commonly heard in our city.  Vehicle traffic is typically 80, a man giving a loud speech is about 75, normal conversation is 65-70, and a lawn mower is 90.  “If you want 65 DBA it’s physically impossible.  Whole areas of the city have background noise that is louder than that.”

Ferndale resident Francine Hachem was one of over 150 people who have signed the petition so far.  While she agrees that noise can be a problem Downtown, she didn’t realize how restrictive the petition was.  “I don’t think people realize when they’re signing this how low the numbers actually are,” she said.  “I wouldn’t have signed it if I knew, and I think people need to realize what it is they are signing.”  Petitioners only need 266 signatures to have the change voted on by council.  If council does not accept the change it will be put on the ballot for popular vote in November.

In the past few weeks Police have stepped up enforcement, giving two citations to people associated with Club 9.  At the City Council meeting on August 9, 2010 Police are expected to give more information about sound ordinance enforcement.  The Ferndale Downtown Development Authority (DDA) will also be presenting their recommendations for how to deal with noise throughout the city.

Mayor Covey said that while the topic feels divisive, it’s nothing that Ferndale hasn’t heard before.  “In the late 90s the first club that opened at the time was called Karma, now Boogie Fever.  We had a lot of meetings and we were able to solve that problem,” Covey said.  “A few years later at Hazelhurst we had Club Cobalt, now Eden, and we solved that problem as well.  Then when Temple, which then turned into Pronto and now Via Nove, was a dance club and noise was a problem for the senior building behind.  It seems like it’s a tough, insurmountable problem, but we have solved this before and we will again.”

Several solutions were discussed, including the petition.  The noise problems Covey discussed were remedied mainly with physical changes to the buildings involved, including soundproofing.  Brain Kramer, owner of Rosie’s, said he feels singled out by residents and “frustrated” by the endless complaints.  He said that when he submitted plans for the building they included a 15 foot tall wall and a line of trees that were intended to buffer the noise from the bar/restaurant’s outdoor patio.  “Those did not pass appearance review and we had to go with the lower wall.  That’s what the city wanted,” he said.  Kramer said that he’s willing to invest in a higher wall if the City will approve it, but he hopes that once the problem is solved the complaints will stop.  He also said that it isn’t fair to business owners who are in the City day in and day out to be restricted by sound limitations, but that outside groups come in for festivals and events, get their noise waived, pay bare minimum for city services and get “preferential treatment.”

Jerome Raska, owner of Blumz by JR Designs, is concerned about the proposal.  His flower shop plays soft mood music through speakers on the outside of their building.  “I’d hate for use to be too extreme and ruin the ambiance we’ve created here in Ferndale,” he said.

Wells and a handful of other residents listened to the discussion and heard suggestions for compromise, such as increased enforcement or changes to businesses to buffer the noise, but they are still moving forward with the petition.  “As the right to swing your arms ends with the other person’s nose, the “right” to be loud and booming ends with the other person’s ears and bones.”