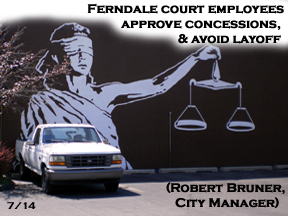 Although the collective bargaining agreement between
the 43rd District Court and the Ferndale Association of Court Employees does
not expire until June 30, 2011, the union approved an agreement with the
Court that will freeze wages and reduce health and prescription drug
insurance benefits during the fiscal year that began on July 1.  The Court
agreed there will be no layoffs through the end of the fiscal year.  One
Court employee had previously been scheduled for layoff.

Although the Court, not the City, is the employer, the City is the funding
unit.  City Manager Robert Bruner said, "It's nice to see union employees
stepping up to the plate and sharing the sacrifices required to maintain
services with decreasing revenues."  Nonunion City employee salaries were
reduced by 5% on July 1 and health and prescription drug insurance benefits
will be reduced on August 1.  The City has been seeking similar concessions
from union employees since February.  The agreement between the Court and
its employees is the first concessionary agreement approved by a Ferndale
union.