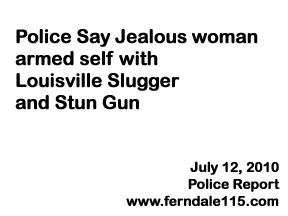 Ferndale police arrested a woman who attacked the home of her ex-boyfriend. Tiffany Adkins took her two young children and went to the house of her ex-boyfriend who lives on College street. Adkins became enraged when she found that the man had a woman guest at the home. She took a baseball bat and beat on house with the bat. She broke the door and front window. She was armed with a stun gun and tried to enter the home thought the window, and cut her hand.

When police arrived at the scene, Adkins was still holding the bat in front of the house. She was arrested, taken to the hospital for treatment of her wound, and lodged in the PD lock-up.

No other major weekend events. Arrested included one person for OWI 3rd offense, and another for OWI 2nd offense.