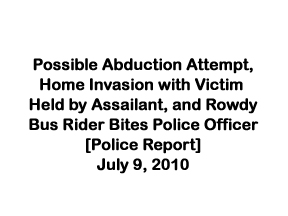 The Following is a report issued by Lt. William Wilson of The Ferndale Police Department on July 9, 2010.

On Thursday, July 8th Ferndale Police responded to the area of E. Hazelhurst / Paxton on a report of a possible attempted child abduction of a 13 year old girl.

The girl was outside near the corner when she was approached by a man who drove up in a van. The man asked the girl her name. When she began to walk to her house to take refuge, the man told her to “come over here”.  When the girl made it into the home, the man drove off.

People should watch for a person and vehicle matching this description. Anybody with information please contact Ferndale Police.

On Thursday, July 8th at 10:41 a.m. Ferndale police responded to a 911 call of an ex-boyfriend trying to break into a woman’s home. When the 31 year old victim phone police, she said the man was trying to break into her front door. Before police arrived, the man broke into the home through a bedroom window, and the woman escaped out of the house onto the front yard. When police arrived, the man had a hold of the woman. The man and woman had previously had been involved in a dating relationship. The man is currently on parole stemming from a 2002 carjacking conviction; part of the conditions of parole are that he not contact the victim in this case. Police arrested him for Home Invasion. The is being submitted to the prosecutor’s office for warrants. 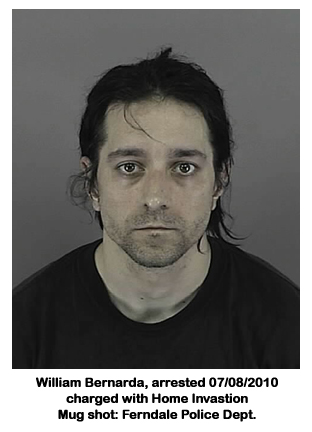 On Weds. July 7th, Ferndale officers responded to a request from a SMART bus driver to remove a disruptive passenger on the bus that the driver parked on 9 Mile in front of the police station. An officer met with the 49 year old woman on the bus and asked her to leave. The woman refused and struck the officer in the face. The woman then fought with officers. The officer grabbed the woman to arrest her and remove her from the bus, and she bit him on the wrist. The bite was hard enough to break through the officer’s skin.

The woman was charged with Assaulting a Police Officer (4 year felony) and was arraigned by Magistrate Mead who set bond at $10,000 c/s/10% 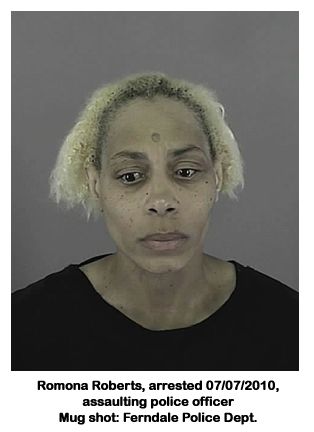