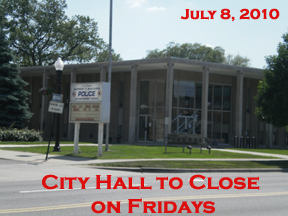 City Hall to Close on Fridays

Ferndale City Hall will be closed to the public every
Friday beginning with July 16, 2010 and continuing through June 24, 2011,
the last Friday of the fiscal year ending on June 30, 2011 (FYE 2011).  The
change is part of the City's efforts to manage its affairs efficiently and
economically in FYE 2011.  The City's workforce was reduced by 22 percent
between FYE 2010 and FYE 2011.  The City Hall workforce was reduced by four
employees including the Assessor/Treasurer and three clerical employees.
The City outsourced assessing services to Oakland County and some treasury
services to Comerica Bank.