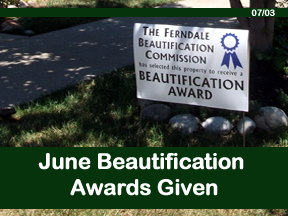 The Commercial Property award winner was Craig Martin Sports and Event Management at 963 Allen.  “It used to be Roy’s Radio was for so many years.  Just got copy of Crows nest and they were talking about Roy’s Radio, which I thought was interesting.  Many neighbors pointed out that he’s got a nice patio back there,” Snow said.

Orlando and Deidre Padilla of 720 Leroy won one of the residential awards.  Snow called it a “beautiful Victorian looking property.”  She said they lived in the home for 11 years,  and was very impressed that it had “lots of trees, a lot garden and garden between sidewalk and street.”  The house was built in 1917.

“Natalie Nunnally of 455 E. Saratoga is a young mom with a couple of kids she’s really dressing up front and back,” said Snow of the final June 2010 Beautification Award.  “The front yard is very small but very attractive.”

The Beautification Commission is currently accepting nominations for July.  If you know of a home, business or block that deserves to be recognized for improvement, please contact the Department of Public Works at 521 E. Cambourne, phone (248) 546-2514, or fax - (248) 546-2521.