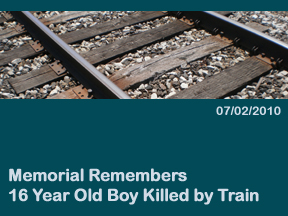 David Michael Smith was just 16 years old when he was killed by an Amtrack Train on June 29, 2006. “David and his friends went to 7-11 and had to cross the tracks at Saratoga and Hilton,” said his mother Dianna Smith. “One of the boys took a quarter from his pocket and said he should put this on the tracks. David took the quarter from his hand and ran back across the tracks to put the quarter on the tracks and jumped off.  Somehow he was pulled back into the side of the train.”

Dianna and her husband Lloyd want to make sure that her son’s death isn’t forgotten, and that children learn the importance of being careful around train tracks.  “They need to know the dangers and stay far away from moving trains,” she said.

A memorial was held for David on June 27, 2010, after the owners of the cemetery he is in decided to raise his headstone – a full-color Bronze headstone with David’s image on it – to an upright position.  In Roseland Park Cemetery in Royal Oak new owners have decided that families with two or more plots can have their headstones upright.  “The new owners are doing a great job of turning the place around,” Dianna said.

“The Memorial Dedication Service was beautiful.  Pastor Bob Galey from Oakland Woods Baptist Church in Clarkston spoke at this event…Even though there were tornado warnings and rain during the ceremony we had 30-35 people there.”

Since David’s death, the Smith family does fund raisers to help support the Ferndale Youth Assistance program.  They also provide a $500.00 Scholarship to a Graduating Senior that has been chosen as the Volunteer of the year.  This year they were able to give two awards.  Miranda Zoppi from Oak Park and Stephen Stocker from Ferndale were each given a scholarship for overcoming adversities and giving back to the community.  “Both of these seniors were very deserving,” Smith said.

For more information about Ferndale Youth Assistance, go to http://ferndaleyouthassistance.org. 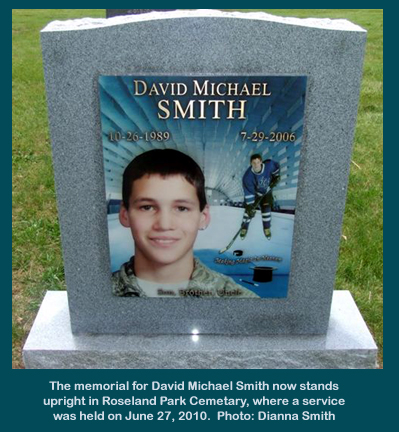