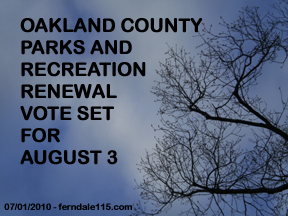 A proposal to renew the operating millage for Oakland County Parks and Recreation will be on the August 3, 2010 countywide ballot.

The parks and recreation 10-year millage renewal is not a new tax or a tax increase. The cost to the owner of a $175,000 market value home is approximately $21 per year.

According to Lewis, survey respondents indicated they were most willing to fund repairing older facilities with their parks and recreation tax dollars. Support for the acquisition of open space, whether left undeveloped or for recreation usage, remained high.

“The economic value is better for homeowners because the 10-year millage renewal rate is authorized for 00.25 mills, but the parks system is only levying the reduced rate of .2415 mills due to the Headlee Amendment,” Lewis said.

Surveys conducted in 2006, 2008 and 2010 “reflect consistent messages from our guests about what they want at our facilities and what type of programs and services they need,” Parks Executive Officer Dan Stencil said. “We’re able to keep a finger on the pulse of the public’s priorities by using research tools regularly.”

For more information on the Oakland County Parks and Recreation millage renewal proposal, go to www.DestinationOakland.com.