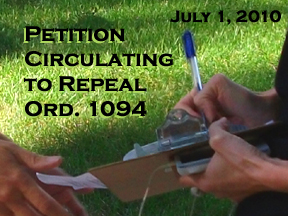 Friction between the Ferndale City Council and Ferndale Police prompted Council to pass Ordinance 1094 giving administrative authority over several departments to the City Manager.  The 4-1 vote means that the City Manager now has authority to request documents from departments, and compels department heads to work with the City Manager on issues like budgeting and exchanging information.  The move brings Ferndale’s structure up to date with how nearly every other city in Michigan is organized, however a group of residents is now circulating a petition to repeal the ordinance.

“We’re not necessarily opposed to a City Manager having this role,” said petition organizer Tiffani Gagne.  “I know they do this in many cities.  But, given all that is going on with layoffs and behind the scenes conversations, this is not the way it should be done.  Timing is everything.”

Gagne and her husband Tom have experience with petitioning, as they led the fight against a PSD Tax on businesses in 2007.  With the Ordinance 1094 repeal they need to collect 266 signatures by July 19, 2010 (which is based on 20% of the highest number of votes for the lead council candidate in the last election).   She says there are at least 18 residents petitioning, and they have collected over 100 signatures so far.  “Our goal is to get at least 400 so that we can really send a message.”

A proposed new City Charter was voted down back in 1999 which included this administrative change along with other changes.

Supporters of Ord. 1094 say that it is necessary to streamline government in a time when budget cuts and staffing limitations are beginning to affect the services offered to residents.  The ordinance brings Ferndale’s administrative structure in line with what nearly every city in Michigan has, which is a council that relies on a City Manager to handle the day to day business of the City, while they oversee to ensure the Manager is directing in accordance with their wishes.

Those who want the repeal say that changes to the Charter should be made by a public vote. The change was implemented by a provision in the Charter that allowed Council to do so with a 4-member vote.  In this case the vote was 4-1.  “It may be the proper thing to do, but this is the improper way to do it,” said Ferndale resident Patricia Sissell. Opponents also say the move takes power away from department heads, particularly the Police and Fire Chiefs, who have historically been more political than in other communities.

Tom Gagne, who has run for mayor and council in previous elections, but has never been elected, outlines the reasons for the repeal in his blog (http://tggagne.blogspot.com/).  “First, Ferndale voters have already twice turned-down initiatives to rewrite the charter….Second, council was both arrogant and derelict to not inform residents of their intent to change the charter…Third, council provided no justifications beyond the superficial for why the ordinance was necessary, or why it must be voted on immediately.”

Councilperson Mike Lennon cast the one dissenting vote.  “It’s not new, but it’s sudden,” said Lennon.  “Why not bring it to the ordinance committee?  This is a major change to our form of government.  In 1999 the people said no.  This seems like a power grab to me and it stinks.”

The events leading up to the decision to delegate authority are outlined in our previous article, which also describes in more detail how the Ordinance will affect residents and City leaders - http://www.ferndale115.com/20100616powershift.html.

Councilperson Scott Galloway defends his vote in favor of Ord. 1094.  “It is hard to understand the concerns of the handful of citizens opposed to Council delegating its day to day oversight of the appointees to the City Manager.  To date, not a single reasonable, rational or thoughtful explanation has been offered as to why Ferndale can't or shouldn't operate in the same manner as the overwhelming majority of cities in Michigan.

“The President of the firefighters union [at the June 14th meeting] said he was concerned that the City Manager would not be as responsive to the needs of the Fire Department as the City Council.  Such a claim is ridiculous since the full time City Manager who works 250 days a year will be much more available to the Fire Chief than the City Council that only convenes in regular meetings 24 times a year.

“Others have expressed concern that the City Manager does not have the specialized skills to manage the departments, as though Mr. Bruner would be advising Chief Collins how to conduct an investigation or directing Chief Sullivan how to attack a fire.  Such claims are disingenuous and insult the intelligence of the citizens of Ferndale.

“Opponents of the delegation of day to day oversight of City operations are the same people who oppose almost everything that the City Administration or City Council does.  Their knee jerk opposition to this ordinance is simply a reaction developed over the years to any changes within the City.

Ferndale must change how it operates to survive in the 21st century where municipal resources are limited and the demand for services is high.  Ferndale government has long been characterized by department heads who do not communicate with one another or Council and do not coordinate their activities effectively.  As we are forced to reduce the size of City government, we can no longer afford such inefficiencies.  Delegation of day to day oversight of all city departments to the City Manager is a step towards better municipal governance given the limited resources available to Ferndale,” Galloway said.

If enough signatures are collected and validated, they will be presented to City Council who will vote whether to repeal the ordinance or not.  If they chose not to repeal, the issue will be placed on the ballot for the general election in November.

If you would like to submit a letter to the editor (FERNDALE VIEW) about this or any topic, please go to www.ferndale115.com/views.html.