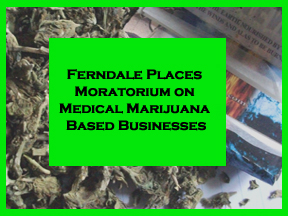 On June 14, 2010 the Ferndale City Council voted 4-1 to place a 3 month moratorium on medical marijuana-based businesses, giving the city time to figure out what zoning regulations they may want to impose, and what general direction they would like to see the local medical marijuana industry take in the City.

“I really want people to understand that we are not banning these businesses, we are supportive of these businesses going in, we just want to make sure that we do everything properly,” said Councilperson Melanie Piana, who proposed the three month moratorium.  Piana said that she voted for the 2008 citywide medical marijuana ordinance, but feels that a wait will give the city time to consider the different types of businesses that might open. The moratorium gives the City time to craft guidelines so that they don’t have to spend as much time and money on having the City Attorney review each business.  “We’re approving by lawyer,” she said.

Community Director Marsha Scheer stated there were currently eight medical marijuana-based businesses that were at some stage of the business-development process in Ferndale.  One is a proposed marijuana farm, another a café that would sell pot brownies, and others that have collective growing arrangements.  Clinical Relief, located on Hilton, opened before the moratorium.  They are still open for business because they were grandfathered in, i.e. they opened before the ban was enacted.  The City recently revamped its Zoning code, but did not consider how medical marijuana businesses might fit into the big picture.  “The planning commission felt that there was not enough profit in mm. for it to be a commercial business, so they only considered home-based businesses,” Scheer said.

City leaders are expected consider if a special land use permit will be required for these types of businesses, and what other regulations might be appropriate, such as limiting the areas they can open their business in.

Police Captain Timothy Collins said that restricting such businesses to certain areas of the city had advantages and disadvantages.  Keeping the facilities in industrial areas means there is less police presence around those buildings, however having visible retail fronts also can attract an undesirable element to the city.

The moratorium does not affect the right of patients with a State-issued medical marijuana card to use the medicine they are allowed by law to possess and use, it only prevents businesses from opening in the city during that time.

Covey opposed the moratorium, saying that there has been plenty of time for cities to prepare for the opening of medical marijuana facilities.  “I am very disappointed,” he said.  “We have known about this for two years and I think it sends the wrong message to put a moratorium on something we are in favor of, and that the voters in our city are in favor of.”

Attorney Jim Rasor, who represents the owners of Clinical Relief, argued against the moratorium, saying “this is a peaceful use of medicine that was at least in Ferndale and Royal Oak, approved…It’s good to take a bite out of crime… but, liqueur stores and banks have a lot more crime than medical marijuana facilities.   I think there has been some misinformation.”  He said that current zoning regulation give city leaders enough grounds to stop a business they think might be inappropriate.

Council is expected to revisit the issue within the next 90 days, possibly sooner.