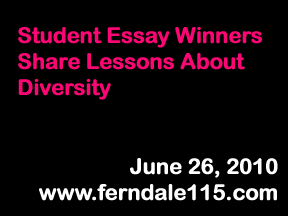 Two Ferndale High School students were awarded $1000 scholarships to be used towards college books and class fees through the William L. Cronin Diversity Scholarship.  Cronin passed away just over a year ago. But he left behind a loving partner, family, and friends who have set up a scholarship fund to help carry on Cronin’s believe in a diverse, loving world. Cronin's partner, Richard Latimer, is a former Ferndale High School Student.  Citizens For Fair Ferndale and Ferndale Schools helped facilitate the contest.  The scholarships were originally for $500 each, but Latimer's employer Chevron generously matched the donation.

“Human diversity makes tolerance more than a virtue; it makes it a requirement for survival.”  This is a quote from the famous author Rene Dubos, and the peak of his thoughts to human philosophy.

Diversity to me is the understanding that people are unique, but at the same moment notice our differences.  This applies to race, age, ethnicity, sexual orientation, and actually respectfully accepting that people that aren’t like you.  I’ve had the opportunity to be within a diverse community my entire life.  From living in Oak Park, to my schooling in Ferndale.  Diversity doesn’t affect me.  I affect diversity.  I say this because people like me who make an effort to blend with every group, every culture and become socially accepted by all, set an example for others that need to follow our footsteps.  Even though certain people from your primary group won’t understand what you’re doing, and can’t realize that we need all people to survive, an individual must stay strong and do what they believe and try to persuade others to do the right thing.

Tolerance is just letting something happen without fully understanding why it happened.  With the idea of diversity, tolerance is not good in any form.  Just tolerating excludes the fact that a person still doesn’t accept others, and can well be called a timid bigot – afraid to come out and say how they truthfully feel because it’s not universally incorrect.  Intolerance is the curse of our country, even though it’s not recommended, it’s accepted by society.  Experiencing intolerance first hand hurts, but it is the ugly truth that some people are sill prejudiced and it may never go away.  I believe diversity is something that you get a feel for instead of learned.  It’s more of a feeling that is affected by the outside world, and how much you let the environment deter that feeling is upon the individual.  Institutions, your essential group, and parents persuade the most towards diversity, even it’s for the better or worst.

Coming from Canada and a very multinational family, my life is very different from what is considered normal or expected in today’s society.  I represent the sheer definition of diversity.  I was born in Montreal, Quebec, Canada and I grew up in Ottawa, Ontario.  My father is a Muslim from Saudi Arabia and my mother a Christian from Haiti.  Also my stepfather is from Congo and my stepmother is from the United States.  Growing up in such a multiethnic family has allowed me to learn many languages such as French, English, Creole and conversational Arabic.  In addition I have learned to respect and approach different kids of people with various cultures and religions.

In order for my family and I to accept each other’s differences, we had to learn to tolerate and adapt to the customs of each culture.  For example in Saudi Arabia, Haiti, Congo and North America, the systems for greeting people are all different.  In Haiti we greet each other by giving a kiss on each cheek.  In Saudi Arabia and Congo we welcome each other by giving two kisses on one cheek and one on the other.  In North America we hug and shake hands.  In addition I enjoy the various types of ethnic foods that each culture has to offer.  Middle Eastern food such as meat or chicken sharwmma and hummous along with Haitian dishes like du rie a djon djon and friend plantain are staples in our family.  Canadian foods like poutine, and American foods like fried chicken are some of my favorites.  But I refuse to eat anything from Congo because it just looks nasty.

Tolerance is not always good enough.  Growing up practicing Islam and Christianity, I have seen a level of intolerance in my family towards both faiths and we do not always agree.  I recognized the similarities of both religions and have compromised with their differences.  This has allowed us as a family to accept each other and avoid having conflicts so that we may practice our faiths of choice.  By maintaining an open mindset towards both of the religions, we celebrate and respect each tradition.  During the Muslim holy month of Ramadan I fast and enjoy celebrating the Islamic Enid holiday that follows.  As part of my Christian culture, we put up a Christmas tree.  I grew up going to Friday Prayer at the mosques and Sunday services at the Church.

It is imperative, particularly in today’s society, to accept and respect the diversities of everyone in order to build a better future for all.  My ambition is to become a family physician because I want to help all people with no regard to what their beliefs are.  Being that I have experience with many different cultures, as doctor, it will be easy for me to work with my patients.  In addition it should be vital for schools to provide a diversity course to educate our youth about the importance of tolerance when dealing with all people.  Diversity can be very special, by taking our differences and putting them together like a puzzle can come together and gain a better understanding of each other.