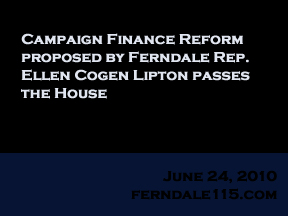 When the elected officials of Acme Township, near Traverse City, refused to approve plans for their local Meijer store to expand, the large Grand Rapids-based chain fought back.  They targeted officials who didn’t vote in their favor, finding pro-Meijer candidates and funding a $100,000 ad campaign that no small-town city councilperson could compete.  “That influx of money destroyed the political process in that city.  That’s why we have campaign finance rules in place – so that companies can’t just come in with a bunch of money and drown out the voice of the people,” said State Representative Vikki Barnett.

Barnett, who is from Farmington Hills, and Rep. Ellen Cogen Lipton, who is from Huntington Woods and also represents Ferndale, held a press conference May 17 at The Kulick Center in Ferndale to unveil a package of campaign finance reforms aimed at countering a recent US Supreme Court ruling they say allows “Wall Street corporations, foreign companies and Federal bailout recipients to anonymously spend unlimited amounts of money to influence elections.”

Lisa Brown, the third representative involved in these proposals, said “Voting is one of the most important ways for our residents to be heard and to ensure their government is working for them.  These reforms will ensure that the voices of Michigan are not lost in a tidal wave of anonymous corporate dollars.”

The proposed reforms, which passed the House of Representatives on Tuesday, would effect Michigan elections by:

In January the U.S. Supreme Court decided in Citizens United v. Federal Election Commission to overturn previous laws that limited the influence of corporate money in elections and campaigns.  The three Representatives, all Democrats, felt that “the move opened the door for big banks, the insurance industry, big oil and drug companies and other special interest to spend unlimited funds to influence the outcome of elections with no accountability or transparency.”

On June 22, 2010 the proposed reforms passed the House of Representatives with votes of 64-42, mostly along party lines.  Now the bill will be heard by the State Senate.  For more information on this topic go to Ellen Cogen Lipton’s website - http://027.housedems.com.