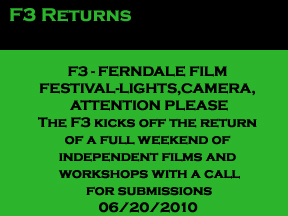 F3 - FERNDALE FILM FESTIVAL-LIGHTS, CAMERA, ATTENTION PLEASE; The F3 kicks off the return of a full weekend of independent films and workshops with a call for submissions

F3 attracted thousands of moviegoers and raised over $2,500 for local charities in 2009 through ticket sales at the inaugural event.

Ferndale will again be regaled in the avant-garde as the festival brings together film talent and charitable donations generated by a four-day weekend of movie screenings, workshops, demonstrations and celebrations. As the winner of the Great American Main Street Award at the National Main Street Conference, Ferndale will morph into a city-scape for dozens of films in six categories along Nine Mile and Woodward and outdoors at two open air screenings.

Dean Bach, of the F3 Board of Directors, stated “I see F3 as a centralized location for independent filmmakers to showcase their work in a emerging Michigan film industry”, as the owner of Dino's in Ferndale continued, "We surpassed our expectations last year and this year the stars are the limit."

To kick off F3, the festival is calling for submissions at ferndalefilmfestival.org for films produced by both first time and
professional filmmakers starting June 1st with a deadline rolling through the
end of August.

This year also welcomes back the "Micro Mini" contest, with filmmakers invited to create films under 300-seconds meeting the detailed criteria at Ferndalefilmfestival.org. Filmmakers will have an extended deadline of September 20, 2010 to create these films, and "Micro Mini's" are accepted in any genre and style, but must strictly meet criteria as posted. Winners will be awarded a Fernie trophy judged at the closing awards ceremony, September 26th.

As a non-profit corporation driven entirely by volunteer participation, F3 will require the efforts of hardworking volunteers known as the F-Troop, as
ushers, marketeers and film screeners.  Coming together as a creative force, volunteers of all stripes will also be awarded internship credit and will receive a certificate of achievement. To learn more about how to become part of the F Troop, go to ferndalefilmfestival.org and click on the “Volunteers” tab.

As it did last year, the F3 will offer strong educational programming, with several workshops on a variety of topics, lead by credentialed film professionals.

Said Board President and former Mayor of Royal Oak, Bill Urich, “In our infant year we screened nearly 60 films, conducted workshops to educate on film and film production, and staged family friendly events. In terms of the economy, we are in strong support of the film incentive, and the F3 last year doubled the traffic for Ferndale merchants, so it’s a great, productive and fun event for every one involved.”

News on F3, including information on how to purchase tickets starting in late summer online can be found at the festival site at ferndalefilmfestival.org.