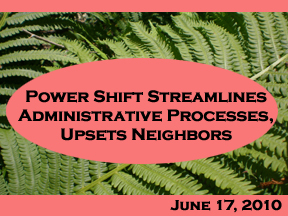 Following several power struggles between City leaders and the Police Department, The Ferndale City Council voted Monday to transfer direct supervision of departments from the Council to the City Manager.  The transfer of authority required Council to pass an ordinance with at least four votes, which is what they got, with Councilperson Michael Lennon voting no.

“It’s not new, but it’s sudden,” said Lennon.  “Why not bring it to the ordinance committee?  This is a major change to our form of government.  In 1999 the people said no.  This seems like a power grab to me and it stinks.”

Members of the public were confused and upset by the change.  “It may be the proper thing to do, but this is the improper way to do it,” said Ferndale resident Patricia Sissell.

However members of Council say that the change brings Ferndale in line with the way all other cities are managed in this area.  The ordinance saves the City time and resources by giving permission for the City Manager to perform basic administrative functions, like requests for information, without having to call special meetings or put off decisions for up to two weeks so that council can meet.

Though the move does not affect any of the day-to-day operations of the department, it does change the procedure by which department heads in the Clerks Office, Fire Department, Police Department and the City Attorney communicate with those vested with the responsibility of running the entire City.  Before the ordinance was passed Monday, the City Council was responsible for supervising department heads.  This means that whenever the City Manager needed to request something of the department heads he either relied on the department head to be helpful out of courtesy, or had to bring the issue before the entire council for a vote.  This meant that procedural requests and even requests for information in publically-sensitive situations had to be made in public, and had to either wait until the next council meeting, or had to be dealt with in a special meeting.

By inserting the City Manager into the chain of authority, Council members hope to cut down on the number of beurocratic requests that unnecessarily take up the time of five people instead of one.  Nearly every city in Michigan gives authority over all departments to the City Manager, who then reports to the Council.  At any time members of Council still have the power to direct the City Manager to do their bidding, and the ability to fire him at any time.  “What I’ve concluded is that it’s really hard to get accountability with five part-time bosses,” said Councilperson Melanie Piana.  “The day to day management should be by people who are there day to day, we are not.  This is part of streamlining government.  It’s about using our tax dollars more wisely.”

Example of recent cases where the administrative process, which has been in place for over 80 years, has impeded Council’s ability to govern effectively have been:

●In December, when a pedestrian was hit by a car on Woodward, and subsequently died, City leaders were not informed.  After reading about the tragedy, Mayor Craig Covey requested that the Police send members of Council the same information they send to the media, to let them know about significant events/crime in the city, and his request was denied.  There were also other similar situations where the media ran stories with information from Police that City leaders knew nothing about until after they had already made headlines.  “I asked what it would take to get press releases in real time, and I was told ‘three votes’,” Covey said.

●The highly publicized feud between The Ferndale Police Department and the County Prosecutor’s Office also brought to light some of the problems with scattered leadership.  “Because Council had to be present, it elevated the tension on both sides,” said Councilperson Kate Baker in an interview after the meeting.  “There were questions that obviously had to be asked, but would have been handled internally if the City Manager were allowed to make requests for information without having to gather five people and discuss sensitive information publically.”  County Prosecutor Jessica Cooper has made some strong allegations against the Ferndale Police Department, which are being investigated by Council. (http://www.ferndale115.com/19p8police.html)

●The scattered-distribution of power also meant that during budget season when department heads did not comply with requests for information from the City Manager, he had to wait until a public meeting and ask the council to exercise their authority to request the information. Not having the proper information hindered the process, and brought the Police Department publically before council on Jan. 25, 2010 to hear the paperwork request officially directed by the five members of council, rather than giving the City Manager the numbers he requested.  Because of this, Council did not receive the Police Department budget numbers until nearly a month after the other departments had complied.

In the memo describing the ordinance, City Manager Bob Bruner stated, “Under the best circumstances, the supervision of Department Heads diverts the Council’s time and attention from the legislative and policy-making role.  Under financial distress, the Manager cannot be responsible to the Council for the proper administration of the City’s financial affairs without the supervision, direction and control of all divisions of the City Government.”

The change also makes it easier for department heads to communicate with the City.  “The role of a city council is to set policy and strategic direction.  When issues arise, our appointees deserve more timely support and decision-making that our full-time administrator can provide,” said Piana.  “We need to become more nimble in our approach and response to solving our challenges.  This change is not just for the current council, appointees and city managers, but also for the professionals and elected official who will take our seats in years to come.”

Patrick Sheehan, a union leader from the Ferndale Fire Department, spoke at council against the change.  “This charter has been in place 80 years.  There’s checks and balances in government.  This town has been set up by the founding fathers to be a democracy, not a kingdom,” he said.  “I can’t believe you’re willing to minimize the power you are given.”  In an interview later Sheehan said that he doesn’t want Ferndale “to do things the same as everyone else.”  He added “If you drive up and down 8 mile and look to the north at the cities you can that Ferndale is different.  We’ve always been a Police and Fire town, and it makes a difference.”

In 1999 voters rejected changes to the City Charter that would have provided for a similar administrative change.  “There were a lot of reasons why that Charter didn’t pass,” Baker said.  “That wasn’t the only issue.”  She also said that she understands why people might be concerned.  “Some people are just fearful of any kind of change.  But without being involved in city government as we are, it can be hard to understand.”

Councilperson Scott Galloway explained his vote, “The Chiefs will still be in charge of their departments, but will report to the City Manager.  The City Manager has the professional training and experience to manage employees and organizations the size of the City of Ferndale, Council does not.  Some vey challenging times are ahead for Ferndale and we cannot afford to have department heads blaming others for information not being provided, assignments not being completed or initiatives not pursued.  All of these problems have plagued Ferndale government since I first took office in 2001.  Next year we will not have the luxury of some department heads fighting for their own budget in a vacuum, without concern for how their portion of the budget affects overall municipal operations.  Next year we will not have the luxury of brinksmanship currently being demonstrated by our labor unions.  The actions taken by Council this year are necessary to get the resources and stakeholders in Ferndale all working together for the challenges ahead of us.”

A group of citizens, loosely organized through the Save the Ferndale Police Facebook Page (http://www.facebook.com/Savetheferndalepolice), is organizing to have the ordinance repealed.  According to Tom Gagne, who successfully campaigned against a PDS Tax in the past, the group must get 266 signatures before July 18th to compel council to reconsider the ordinance.  Gagne says that he is not circulating the petition himself, but is sympathetic and happy to share the knowledge he gained from figthing the PSD tax.

To view the entire Council meeting, or any of the relevant documents, go to the City of Ferndale website at http://www.ferndale-mi.com/Services/Cable/CityCouncilVideo.htm.