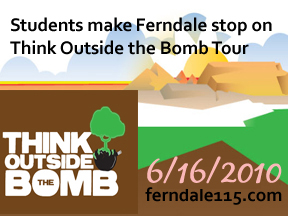 As part of a 40-city summer tour, teens from Think Outside the Bomb Tour entertained and taught the grown ups from Peace Action Michigan at a special Go Comedy! Performance.

The four youngsters talked about their individual experiences as activists, then sang songs about ending war and destruction of the planet by war-making industries. They also performed a puppet show to demonstrate the effects of nuclear radiation on animals in the habitat around a nuclear testing facility.

They are trying to generate support nation-wide for a mass camp out in Las Alamos, New Mexico from July 30- Aug 9 to show solidarity against the bomb-building industry that is head-quartered there.

“President Obama is proposing to increase NNSA funding to the National Nuclear Security Administration to the highest level ever,” said 19-year-old Robert Chavez of El Salvador.  “He is giving $4.5 billion to Las Alamos to refurbish their nuclear program.  This will increase their capacity from 20 nuclear weapons a year to 80 a year.”

Chavez hopes that students and adults will follow them to Las Alamos and help show support for ending the Nation’s nuclear weapons buildup.

“It’s the 65th anniversary of the bombing of Hiroshima and Nagasaki.  There are those who say since the bomb is turning 65 it is time to retire.

Traverse City-based activist Victor Victor McManemy joined the tour for a handful of shows, going to Lansing, Grand Rapids and Chicago to talk about his experiences.  McManley is a folk singer and activist with Nuclear Information and Resource Service.

He talked abut protests in Walled Lake where they were building tracking missiles, about experiences in Fermi, and a new plant in Midland.  He also urged people to fight new mining operations in the Upper Peninsula, stating that court cases over mining nickel and iron are just ruses to set precedent for uranium mining in Michigan.

The students’ puppet show featured a frog with extra legs who was befuddled by the lifestyle choices of a scientist from the nearby nuclear plant.  “I don’t understand,” said the odd little indicator species.  “You trade each day your life for pieces of paper and make dangerous weapons that make you feel safe?”

More information can be found at http://www.thinkoutsidethebomb.org.  Information on Peace Action Michigan, an activist group located in Ferndale, go to www.peaceactionmich.org.