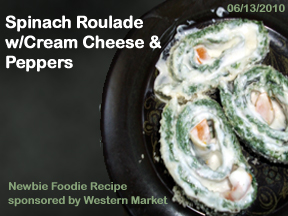 This week I wanted to do a recipe that looked pretty, and was vegetarian.  I picked up Rose Elliot’s “The Classic Vegetarian Cookbook” (©1994 Dorling Kindersley) and decided that a Spinach Roulade with Cream Cheese & Peppers looked like a nice challenge for a Newbie Foodie.  It’s kind of like an over-baked omelet rolled up with cream cheese, which looks fabulous when sliced.  When I was making the recipe for the first time I was frustrated by the number of steps.  And when I poured the egg/spinach mixture into the pan I thought for sure the recipe was doomed because of how watery the mix looked.  I didn’t know what “stiff” meant for eggs, so when I whisked the egg whites it just reminded me of soap.  But, once I took it out of the oven and peeled the wax paper back to see the nice, firm, easy-to-work with base I was thrilled!  It’s an awesome looking dish and probably easy to master by your second time if you’re still learning like I am.  The book has a whole section on roulades, and I highly recommend it. 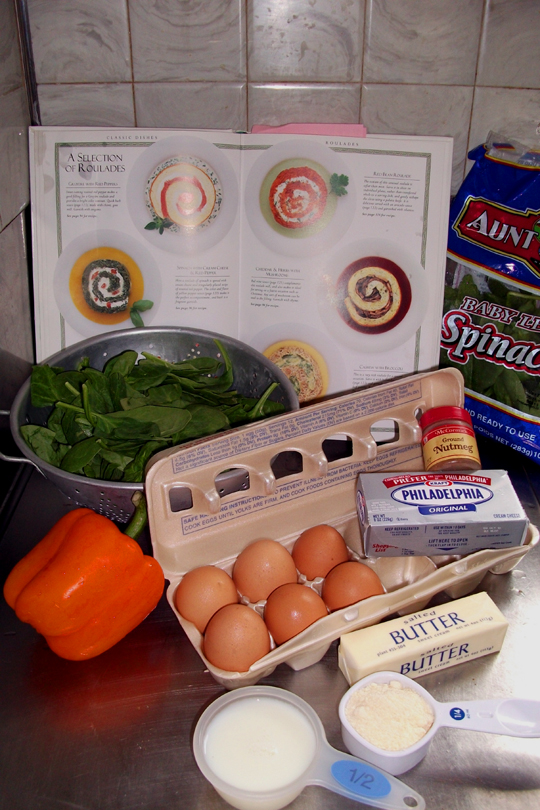 1.        Preheat the oven to 400°F. Line a 9 x 13 shallow-sided baking sheet to extend slightly up the sides.  (NEWBIE FOODIE NOTE- if you put the wax paper up too high it will burn and melt in the oven.  Make sure it does not go over the side of the pan).

2.       Place the spinach I a pan with just the water that clings to its leaves after washing.  Cook over moderate heat until tender: 7-10 minutes.  Drain.

3.       Put the spinach, butter, and egg yolks in a blender and work until smooth.  Transfer to a large bowl, and season with nutmeg, salt and pepper.

5.       Sprinkle 2 tablespoons of the Parmesan cheese over the roulade.  Bake the roulade until just firm and spongy in the center: 12-15 minutes.

6.       Place a piece of waxed paper large enough for the roulade next to the oven, and sprinkle it with the remaining Parmesan

1.       Remove the roulade from the over and place it, face down, onto the paper.  Removed the waxed paper that was used to line the pan from the top.

2.       Roast and peel the pepper.  (cut into quarters, put in broiler with skin side up until skin blackens slightly and bubbles.  Remove and allow to cool. Skin peels away easily with fingernails or a knife)

3.       Beat the cream cheese with enough mild to make it spreadable, then cover the roulade with it.  Arrange the red pepper over the top in widely spaced strips, then roll up the roulade from one of the short sides.  Serve in slices.