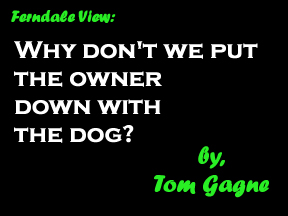 Why don't we put-down the owner with the dog?

On June 4, 2010, an Oak Park girl was attacked by a pit bull and her leg was ripped to shreds.

On June 1, 2010, a 59-year old bicyclist was attacked by four (4) pit-bulls while riding along Metro-Parkway west of Mound.

Still fresh in my memory, because one of the victims was the sister-in-law of family friend, was Dianne Cockrell's dogs killing two of her Iosco Township neighbors in Livingston County.

"Cheryl Harper, 56, and Edward Gierlach, 91, were mauled to death after Cockrell's dogs crawled under a fence at her property across the road from where the attacks occurred."

That's the province of insurance companies.

Rather, I would prefer more severe penalties (and insurance premiums) for people that own and breed vicious dogs.

Merritt Clifton, editor of Animal People, has conducted an unusually detailed study of dog bites from 1982 to the present. (Clifton, Dog attack deaths and maimings, U.S. & Canada, September 1982 to November 13, 2006; click here to read it.) The Clifton study show the number of serious canine-inflicted injuries by breed. The author's observations about the breeds and generally how to deal with the dangerous dog problem are enlightening.

According to the Clifton study, pit bulls, Rottweilers, Presa Canarios and their mixes are responsible for 74% of attacks that were included in the study, 68% of the attacks upon children, 82% of the attacks upon adults, 65% of the deaths, and 68% of the maimings. In more than two-thirds of the cases included in the study, the life-threatening or fatal attack was apparently the first known dangerous behavior by the animal in question. Clifton states:

If almost any other dog has a bad moment, someone may get bitten, but will not be maimed for life or killed, and the actuarial risk is accordingly reasonable. If a pit bull terrier or a Rottweiler has a bad moment, often someone is maimed or killed--and that has now created off-the-chart actuarial risk, for which the dogs as well as their victims are paying the price.

Clifton's opinions are as interesting as his statistics. For example, he says, "Pit bulls and Rottweilers are accordingly dogs who not only must be handled with special precautions, but also must be regulated with special requirements appropriate to the risk they may pose to the public and other animals, if they are to be kept at all."

For those of you struggling with reading comprehension on editorial pages, let me extract a few key sentences. You can right them on your palm for the test later.

According to the Clifton study, pit bulls, Rottweilers, Presa Canarios and their mixes are responsible for 74% of attacks that were included in the study.

If almost any other dog has a bad moment, someone may get bitten, but will not be maimed for life or killed.

"Pit bulls and Rottweilers are accordingly dogs [that] must be regulated with special requirements appropriate to the risk they may pose to the public and other animals, if they are to be kept at all."

For the sake of easier reading, when I subsequently refer to "pit-bulls" I include Rottweilers and other vicious breeds identified in the report.

If we assume, for the moment, that some breeds are genetically more dangerous and/or unpredictable than others, then we should pass immediate legislation discouraging the ownership or breeding of pit-bulls.

If as some owners insist, it's the owner and not the dog, then we should pass immediate legislation discouraging the ownership or breeding of pit-bulls.

If careless and irresponsible (read: stupid) dog owners are so easily identified by their choice in household pets then the best thing to do might be to disarm them. Take their pet away. Probably their kitchen knives and small toys, too.

If we discover a hitherto unknown constitutional amendment protecting the right to bare vicious animals for a well-regulated pack, then we should require special permits with semi-annual proofs of continuous $10 million insurance coverage so that anyone attacked by their "normally gentle and loving" family weapon is guaranteed to live prosperously off the insurance payout--and that includes the next-of-kin of the victim killed by the "docile and great with children" creature.

Being in possession of an unregistered pit-bull should carry a stiff penalty. In the end, I think euthanizing the owner with the dog may be the best deterrent to these attacks. It will certainly cut-down on repeat offenders.

I'm sorry, but I cannot believe the 115 would publish this garbage. So I as a responsible owner of a registered, kind, loving pit bull terrier should be banned and punished for caring for my dog and being a responsible neighbor? The stereotyping done in this letter is embarrassing. BSL is a dangerious line to cross and in most communities it makes ... See Morethe problem worse. Owners who train their dogs to be aggressive, abuse them and allow them to roam the streets don't care about the law to begin with and are not deterred by banning laws. Meanwhile good dog owners with tame, well trained animals should have their pets ripped away from them and be punished? The Clifton Study cited is notoriously inaccurate, as can be found with a little additional research. I suggest starting with: http://dogbitesinformationandstatistics.blogspot.com/2007/11/wheres-clifton-report.html

According to Clifton's report [which is based *entirely* on press accounts], during the 24-year period covered by his study there were a total of 2,209 “[dog] attacks doing bodily harm” in the U.S. and Canada. 1,182 of those attacks were by pit bulls and pit bull mixes. (Lumping mixes together with so-called purebreds makes no sense from any standpoint, but Mr. Clifton lumps them together --- so I will, too, again for the purposes of this post.)

If Clifton’s pit bull numbers are correct, and no more than 49 of the 6,000 or so hospitalizations due to severe dog bites in the U.S. each year are a result of pit bull bites or attacks, then pit bulls and pit mixes are responsible for less than one percent of those hospitalizations.

So .82% of attacks are by pit bulls, so we should ban them them and punish good dog owners for being "careless" and stupid?

Perhaps we should worry more about the number of people killed by bad gun owners? Or how about bad drivers or drunk drivers? Or perhaps we should ban Mr. Gagne from publishing a blog/newspaper article citing inaccurate statistics and asking for innocent people and animals to be punished for crimes they have not committed yet and likely will never commit?