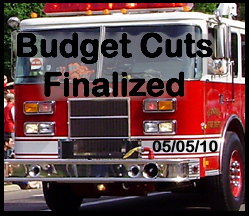 The City of Ferndale approved the FYE 2011 budget on May 5, 2010, complete with a 22 percent reduction in the City’s workforce.  This comes after two months of special public council meetings during which City leaders first came up against a $3.1 million deficit.  City Manager Bob Bruner created a starting-point budget that originally called for a 33% staff reduction.

Voluntary separations and reduction in pay and benefits for non-union employees were able to reduce the deficit and save 11% of the jobs from that first budget proposal.

However the City has not yet been able to reach any agreements with unions, who make up the bulk of the City’s payroll expense.  At the beginning of the budget process, Bruner made it clear that union concessions would be necessary to avoid layoffs and service reductions, and that those concessions needed to be made before the budget was approved. Step 1 was to offer the voluntary separations, Step 2 was supposed to be the union concessions and Step 3 is the budget itself.

Step 1 ended on April 30 when the last of 18 employees separated under the
City's Voluntary Separation Incentive Program (VSIP).  Eleven of those
vacant positions will be eliminated in FYE 2011.  The estimated cost of the benefits provided by the VSIP is $393,300.  The estimated annual savings provided by eliminating those positions is $776,100.  Bruner said, "It will
only take the City six months to break even on the VSIP.  Then the City
begins saving money indefinitely into the future."

Step 2 ended without any union concessions.  Bruner and his team attempted to renegotiate six union contracts.  They had a total of eleven meetings
with the unions.  They provided four unions with written proposals, three
included conditional promises of no layoffs.  They received written
proposals from two unions.  Unfortunately, they were not able to reach any
agreements.

The final budget had cuts in many areas, and was approved with the understanding of using approximately $155,000 of the City’s undesignated unreserved fund.  All non-union employees – including the City Manager - were voted a 5% pay reduction, and a reduction in medical and prescription benefits.

Bruner said he had hoped to provide the City Council with a revised plan for balancing the budget that included similar union concessions, “Instead, I
was forced to present a plan that reduces both the City's workforce and City services."

The budget also included many revisions and suggestions from the various departments involved.  Documents about the budget can be found at the city website - http://www.ferndale-mi.com.  You can also review previous articles on The Ferndale 115 News, including this one which goes through many of the changes that were formally approved on May 5 - http://www.ferndale115.com/20100430budget.html.

Councilperson Lennon was not present for the final budget vote, although the remaining four members and Bruner are hopeful that the unions will agree to similar pay cuts in order to save the jobs that were cut.  “We are looking for balance and shared sacrifice,” said Councilperson Melanie Piana.

Bruner said, "Like the City government, our community members are facing unprecedented financial challenges.  With union cooperation, the City can curtail these
layoffs so employees and taxpayers can share and minimize the sacrifices
required to balance the FYE 2011 Budget."

“We would like to have no layoffs, but that rests solely with the unions,” said Ferndale Mayor Craig Covey.