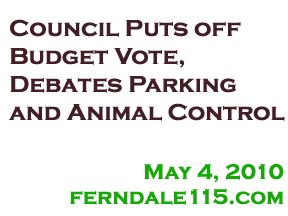 City Council has whittled down the budget from a $3.1 million to a $380,000 deficit.  They met May 3, 2010 to discuss the budget, which must be passed by May 9.  They made no major changes to the proposed FYE (Fiscal Year Ending) Budget 2011 from their last meeting, which you can read about here:  http://www.ferndale115.com/20100430budget.html  (Council approves individual sections of the general fund budget, waits to decide on DDA contributions and how to handle remaining $300,000 deficit, The Ferndale 115 News, April 30, 2010)

As always, complete financial documents, supporting memos and presentations are available at the City of Ferndale’s Website - http://www.ferndale-mi.com.

Councilperson Scott Galloway brought up two main points that he wanted council to discuss further.  The first was an evaluation of the Animal Control Officer position that is due to be eliminated by Council.  The Animal Control Statute of 1919 requires cities to provide some animal control services such as removal of dangerous animals, processing of animal bite cases and quarantine of animals that have bitten a person, and licensing of dogs.  There is debate over how much money would be saved by removing the current Animal Control Officer, Tom Waller, and somehow providing the services through other means such as a part time officer, a position shared in the Department of Public Works, through an outside contractor or through the County.  Rather than making a motion to reinstate the position in the budget, Council has decided to seek more information.

The other question that Galloway brought up was that of transferring $84,000 from the general fund into the Auto Parking fund.  Currently 15% of parking ticket revenue goes into the general fund to be used by the Police Department for purposes of parking enforcement.  The DDA (Downtown Development Authority) has requested that the City stop giving the Police Department that money from tickets, and instead direct that money into the Auto Parking Fund, which the DDA is hoping to acquire by purchasing the parking system from the City once the budget is settled.

Galloway proposed putting the $84,000 back into the general fund for this Fiscal Year and considering it in future parking discussions.  “There isn’t a plan in place,” Galloway said.  “I’d rather figure out the parking system after May 9 instead of laying off people then calling them back later.  I vote we maintain the status quo and keep the money in the general fund.”  He and Councilperson Mike Lennon voted to remove the reallocation from the budget proposal, but that was opposed by Councilpersons Melanie Piana and Kate Baker, as well as Mayor Covey.  Piana said that the DDA’s concern was that the $84,000 was not being used for parking enforcement, since the salaries of the parking enforcement officers is paid for separately.  Baker said that it is a “good-faith” showing of support for solving the parking problem.

Council also reviewed some of the other department budgets, with no major changes from proposals last month.  They also choose to officially make Former Captain Kevin Sullivan the Interim Fire Chief, since Chief Roger Schmidt retired last Friday after 33 years.

The Budget is expected to be approved at a special meeting on Wednesday, May 6, 2010 at 6pm at City Hall.  Council will have to decide if they can lower the deficit, or if they must plan on dipping into the City’s rainy-day reserves. Covey, who is currently running for County Commissioner, said he has no problem dipping into the rainy day fund, saying “it is raining.”  While Galloway said that he refuses to pass a budget that isn’t within at least $100,000 of breaking even.

Meanwhile family members of low-seniority police and fire personnel wait to find out if their jobs will be cut.  There are currently six firefighter positions and ten police positions that are facing cuts if the current budget is approved.