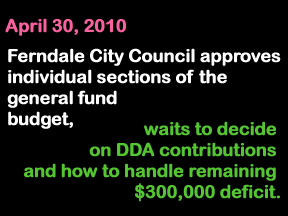 Council approves individual sections of the general fund budget, waits to decide on DDA contributions and how to handle remaining $300,000 deficit

At a special council meeting on April 29, 2010 City Manager Bob Bruner brought forward a budget proposal that was a combination of his initial “starting point” budget and recommendations that were made by various departments through the several-week process.  Council broke the budget down into sections and approved each section, though the entire general fund budget won’t be final until it is approved as a whole, possibly at the May 3, 2010 special budget session (which starts at 6pm at City Hall).

Though each section was approved, the council must still solve the problem of a $300,000 deficit.  The original deficit was $3.1 million, and the gap was filled with revenue-generators, cost cuts and personnel layoffs and early retirement.  None of the involved unions have settled for pay decreases, although those may still be possible, and may be a way to save further jobs.

Below are the sections of the General Fund Budget, and a summary of changes.  Bruner’s memo and other budget documents are available at the City of Ferndale’s website - http://www.ferndale-mi.com.

The operating budget for the City Council was reduced by 44% by capping travel at $1,000 per member, eliminating donations and special events fund, phone reimbursement, office supplies and memberships and dues.  This will save the City $27,500.

Increased revenue from traffic detail accounted for much of a 229% increase in revenue to the District Court.  However the court did suffer cutbacks including a total of three staff positions.  The City has also stopped allocating money from tickets towards the Building Reserve for a new courthouse, saving the General Fund $125,000 a year.  This shows a 13% reduction in staff size and a savings to the city of an estimated $562,277.

The City Hall budget called for eliminating 5.5 positions, including the loss of an assessor/treasurer position, a cable department director, three clerical positions and one part-time technical writer position that was already vacant.  Other cuts were made by eliminating City memberships and contributions to groups and causes.  Ferndale Youth Assistance will no longer be receiving a $4,000 appropriation.  Ferndale Goodfellows will loose a $300 annual gift, and Ferndale Memorial Association will loose a $400 gift.  Councilperson Lennon did wish to remind those groups that they are still welcome to make a request for donations later in the year so that council may reconsider them if there is money available.

Council voted 4-1 to approve the Police and Animal Control budget cuts.  Councilperson Lennon voted no on the Police Department proposals, saying that he would prefer council to wait until the union negotiations were settled before approving any layoffs.  Council voted to eliminate three patrol officer positions, one Crime Suppression Task Force position, eliminate a detective lieutenant position, eliminate a vacant youth detective position, eliminate part time evidence clerk position, and eliminate two part-time crossing guard positions and the animal control service position.  That reduces the department by ten positions.  Council also approved eliminating an $84,000 contribution to the department’s budget by the Auto Parking Fund.  The $84,000 comes from ticket revenue, which will now remain in the Auto Parking Fund to go towards a new parking deck.

Bruner implemented many of Chief Kitchen’s suggestions for saving money and generating revenue, such as by creating a dedicated traffic patrol to write more tickets.  In the original budget proposal, Bruner had asked the DDA to contribute $70,000 to the Police to pay for the bar patrols that service the Downtown area on Friday and Saturday night.  The DDA opposed that contribution and the budget section was approved without it, though Mayor Craig Covey said the contribution may be added back in later.

Members of the Police and Fire Department were in the room waiting to hear if they would be loosing their jobs.  They left together after learning that at least some of them still would be. 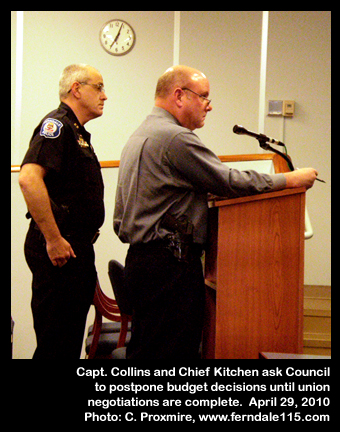 The Fire Department faces a shift in leadership as Chief Roger Schmidt is retiring on April 30, after 33 years of service.  Captain Sullivan is assuming the role of commanding officer until Council appoints an interim Chief, most likely on Monday.  The original plan included eliminating nine firefighter positions, which Councilperson Galloway recommended be reduced to six.  Chief Schmidt also asked that Council restore the part-time clerical position because her work in tracking daily logs helps the department with billing, and collecting revenue.  Council voted 4-1 to approve the reductions in the Fire Department budget, with Lennon again saying he preferred to wait until after union negotiations before making a decision.

Much of the DPW [Department of Public Works] Budget lies outside of the general fund, and will be balanced separately.  The general fund reductions approved by Council include eliminating two full time positions, eliminating overtime, and reducing training and travel expenses.  This is a 27% reduction in costs from last year.

The senior citizens in the audience were happy to hear that the Recreation Department would not be eliminated as originally proposed.  Recreation Director Julie Hall pulled together a bare bones budget that cut costs 53% from last year.  This means cutting back hours and reducing staff to just three people.

Bruner had originally proposed charging the DDA a 5% Administrative Services fee for things like administering bank accounts and payroll.  Councilperson Kate Baker said that the DDA has come up with the solution that rather than contributing the $24,850 to the general fund they would take over their own administrative services.  Council voted to proceed without implementing the fee, and will discuss the administrative change if it is proposed again after budget talks are over.

Council voted for a 5% nonunion employee wage and hour reduction, and a reduction in health and prescription coverage for all City employees.  This is similar to what they have asked of the unions, who make up the majority of employees.

The results of union bargaining will not be available until next week.  On Monday, May 3 at 6 pm Council will meet to hammer out the remaining $300,000 imbalance.  They will also discuss the interim Fire Chief position.