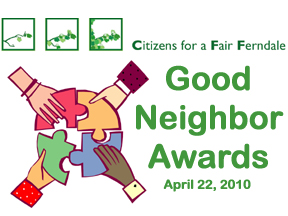 By: Kat Bruner James, Chair of Citizens for a Fair Ferndale

Thank you to Carl Weiler for providing the video.

The nominations have come in, and this year’s Good Neighbors have been chosen.  From well known local business people who have contributed, to numerous local organizations to unassuming folks down the block who have made their neighbors feel welcome, this year’s winners should make us all proud to be a part of this community.

In 2004, Citizens for a Fair Ferndale (CFF) members decided to begin a new program to recognize people in Ferndale who support CFF’s goals and objectives in their everyday lives.  Awards winners are recognized by their actions—no matter how big or small—that promote fairness, equality and the mission of CFF (see below).  Thus began the CFF Good Neighbors = Strong Community Awards (or just “Good Neighbors Awards,” for short).

This year’s nomination process yielded the most nominations CFF has ever received.  And they were excellent nominations.  Before the process began, we had already decided that we would be honoring ten people, as promoted in our call for nominations.  A few nominees had already received a Good Neighbors Award, and the committee decided that we were not ready to recognize the same person twice.  Each submission was a pleasure to review, and we expect that some that were not chosen this year will be nominated again in the future.

The Good Neighbors Awards presentation was held on April 20, 2010 at Go! Comedy.

CFF has more important events on the horizon.  On Sunday, April 25, CFF will hold its School Board Candidates’ Forum.  At press time, the exact time and location were not confirmed, but readers can check www.fairferndale.org for details.  Attendees will have the opportunity to submit questions to the candidates and the candidates will also submit responses to our questionnaire that will be available on our website through election.

CFF also plans to launch a new project in May called, “Hello Ferndale!”  In the same spirit of our Candidate Forums, Hello Ferndale! is intended to provide residents with more information about municipal services, community organizations, and the like.  The first installment of this program, which is headed up by Francine Hachem, will provide an interview style with representatives from the Downtown Development Association (DDA) to explain to residents exactly what the DDA does, how they are funded, and how residents can get involved.  Please watch our website and future editions of Ferndale Friends for more information about upcoming events, including a music fundraiser at Club Bart in June.

The mission of Citizen’s for a Fair Ferndale is to foster a community that is dedicated to the fair and equal treatment of all residents and visitors regardless of sexual orientation, race, color, religion, gender, age, height, weight, familial status, national origin, physical or mental disability.  Our next meeting is April 13 at 7:30 p.m. at the Ferndale Library.