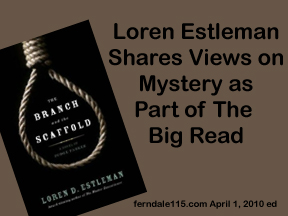 “I remember years ago at a yard sale I got a bound copy of the 1938 Reader’s Digest and on the inside cover it lists the best sellers of that year, and over the 120 or so listed I had maybe only heard of three.  The books that stay with us aren’t the ones that are popular at the time.”  So said Mystery and Western writer Loren D. Estleman at the Big Read Author Talk at Ferndale High School on March 25, 2010.

Dashel Hammet’s “The Maltese Falcon” was such a book.  Its economical wording, slick dialogue and atypical hero sprung the genre of what we all know and recognize as the private eye detective book.  But at the time it was new and enthralling.  Like many writers, Estleman found inspiration in its pages.

Estleman himself has written over 65 books, including over 20 that feature a detective of his own called Amos Walker.  He spoke as part of The Big Read, a month long celebration of literature centered around The Maltese Falcon.  He put the novel into historical and social context as well as compared it to his own work.

“The law of prohibition was based on good intentions,” he said.  “But this is the time when disrespect for authority began.  We saw police going into speakeasies and getting their payoffs.  When people would get pinched buying booze they’d get sentenced by a judge, who would later be out having drinks with the bootleggers.”  Estleman explained that it was this kind of dishonesty that made Americans start to question the line between the good guys and the bad guys.  In the nineteenth century it was the cowboys and Indians that captured the American imagination.  In the twentieth it was the private eye.  “In the next who knows, maybe it will be some evil hacker,” he said.

One thing Estleman admired about Hammett is that his character Sam Spade was such a new phenomenon to readers.  “He seemed to be really comfortable with the police officers, and with the criminals.  He kept you guessing until the very end.  Nobody in the 30s had ever seen a novel that the hero wasn’t a clear hero.”

He pointed out that after Watergate there was a resurgence of the detective genre in America.  “When I came up with the character Amos Walker in 1980 everyone told me nobody wants to read about private eyes anymore.  And of course people in this area told me no one is going to read about Detroit,” Estleman said.  Indeed he proved them wrong with over 20 books.  “Amos Walker is a fictional character who never existed.  In real life detective work isn’t that exciting.  Most detectives are retired police officers who keep track of where people move, divorce investigations, paperwork and stuff like that.  They spend more time in libraries, reading rooms, and now the internet than out in the dark back allies.  But they all do have their stories.”

He also said that police and others involved with law enforcement and psychology have the highest degree of divorce, suicide etc.  “Successful ones develop a sense of humor and can crack really humorous jokes in horrific situations.”  That’s why his character Amos Walker and Hammett’s character Sam Spade have such sharp tongues.  “Amos is a cynic.  A cynic doesn’t expect anything to get better.  A cynic is a disappointed idealist.”

“The private eye of literature is different than the real life detective in what he does.  What we’re creating is a hero for hire – it’s a mythical figure, an American myth like the gunfighter who rides into town, shoots all the bad guys and turns the town back over to the honest people to run again.” 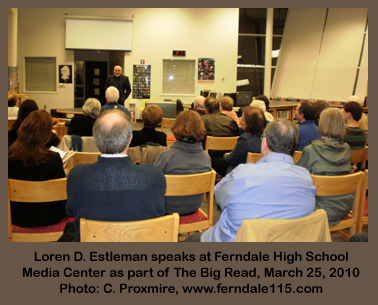 One thing Estleman found fascinating about American culture is that everything we are know for was originally created as a “throw away.”  “Jazz, rock n’ roll, detective fiction, the western, the flow-through tea bag – they’re all things that were made to be used for popular consumption.  But they’ve stuck.”

In 1980 at the age of 28 Estleman gave up “real work” to write full time.  “The thing is you gotta not be afraid of being hungry,” he said.  “It of course helped that I wasn’t married and didn’t have any kids or anyone else to be responsible for.”  It was a struggle but  he said he’s not regretted it a day since.  “What’s the alternative?  Get a job and work?”

Members of the audience wanted to know about his writing practices, and why he writes detective novels and westerns.  Estleman said that he always starts with a title and rarely does much outlining.  “The characters need to take on a life of their own and not be restrained by what the author thinks should happen.”  He says he writes in different genres to keep his mind fresh.  “Each one is a vacation from the other.  I call it literary crop rotation.  I would get burned out if I didn’t do different things.”

Matt Burchi of Southfield was one of the thirty-two people who came out to hear the talk.  “It gave me real insight into how a mystery author approaches his work,” Burchi said.  “It’s such a unique experience to have such a celebrated author in this area, especially one that writes about Detroit.”  Burchi said his favorite Estleman book is Angel Eyes, which is the second book in the Amos Walker series.

You can find out more about Loren D. Estleman at his website http://www.lorenestleman.com.  His presentation at The Ferndale High School Media Center was part of The Big Read, a series of events focused around “The Maltese Falcon,” put on by a National Endowment for the Arts Grant through The Ferndale Public Library.  The new library will open on or before July 10, 2010.  More information about the Library can be found at http://www.ferndale.lib.mi.us. 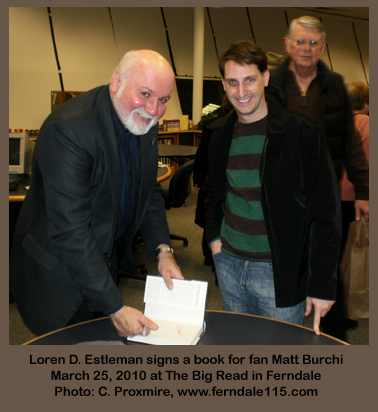