In the months leading up to The Big Read, a month-long celebration of literature focusing on Dashiel Hammett’s detective novel The Maltese Falcon, The Emory hosted a series of Book Parties to help get Ferndale in the mood to talk books.  People of all ages came together once a month to share their views on books like “Fight Club,” “The Tender Bar,” and “Middlesex.”  The fourth and final Book Party, discussing “The Maltese Falcon” was held on March 18th with over 50 people filling up tables and chatting over snacks and beer about the book that people city-wide have been reading.

Katie Hershberger of Ferndale said she enjoyed the private eye tale.  “I found that Sam [Sam Spade, the leading character] was just a no-nonsense guy.  I knew that the falcon was a phony from the beginning, so I already knew the end.  The only thing that surprised me was how Sam Spade got it all put together.” 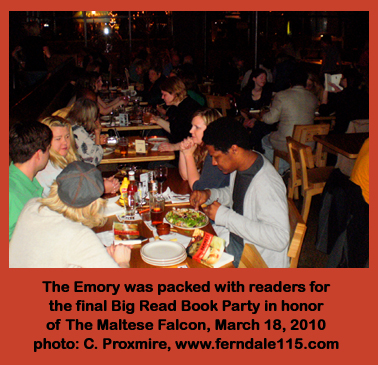 A regular book club attendee, Nicole Frei of Ferndale, said she was happy to try something new.  “I don’t normally read this kind of book,” she said.  “I spent the first half trying to figure it out.  You struggle at first because it’s easy to over-analyze it.  I thought any one of the characters could have done it.”  She also was pleased to see people from The Kennedy Book Club, The Library Book Club and the Book Club for Men all taking part in the collective reading experience.

Not everyone liked “The Maltese Falcon.”  Sarah Wingo of Ferndale said that she really liked the Book Party idea, but not the book.  “I know it’s a product of its time.  I didn’t enjoy the rampant sexism and homophobia.  I liked Middlesex best of all the books.  It was just one of those books that was well-written and you can care about the characters.  I didn’t relate to Sam Spade at all.”

Jim O’ Donnell, the newest member of the Library Board, weighed in.  “I thought it was a good choice because it’s not your typical book club book.  I like detective stories and this is the first in that noir with the tough guy detective.  The movie is close to the book.  I hear Humphrey Bogart’s voice in the dialogue.  It held my interest to the end.  At times Spade can seem unfeeling, and you can see him possibly cashing in for himself.  It’s satisfying to me at the end to see that he is a good character who keeps his principles to the end.”

The Big Read celebration was funded with a National Endowment for the Arts Grant through The Ferndale Public Library.  They held several book discussion groups throughout the city, along with an author talk by mystery writer Loren Estleman (http://www.ferndale115.com/20p7writer.html), improvisational shows by Go! Comedy, a classic film series at The Kulick Center, and an art exhibit with the theme of books for inspiration (http://www.ferndale115.com/19p15gallery.html) that was held earlier in the month at Community Arts @ Paramount Bank Gallery. 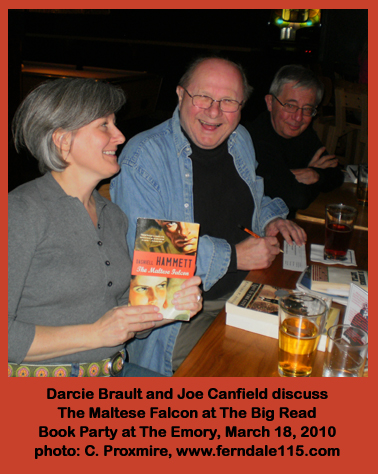 Emily Husband, manager at The Emory, says that though The Big Read is over, the Book Parties may continue.  The Ferndale Public Library has a book club that meets the third Thursday of each month at 12:30pm at The Library, which is temporarily located at 642 E. 9 Mile Road. Their permanent home is undergoing major renovations, and is expected to re-open at 222 E. 9 Mile on or before July 10, 2010.  More information on The Ferndale Public Library can be found at http://www.ferndale.lib.mi.us/.

There is also a Friends of the Library Book Club that meets the last Tuesday of each month except December at 7:30 pm at the Library.  More information on the Friends of the Ferndale Library can be found at http://www.ferndalefriends.org.