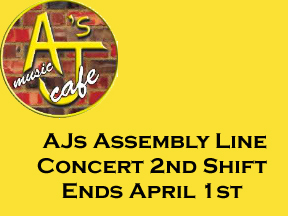 For the second year in a row, AJ O’Neil and the guys at AJs Music Café 240 W. 9 Mile are chugging their way to a Guinness World Record for the longest continuous concert.  Last year, in honor of the American Auto Worker, O’Neil decided to do a 12 day show, filled with musicians of every genre, performing back to back with no longer than a two minute break in between songs.  He encouraged people to sign the “I Pledge America” promise, which says that the next time they buy a new car it will be made by an American company.  The show brought national attention to “the little café that could,” as O’Neil calls it, with coverage in the New York Times, Politico.com and papers state-wide.  Governor Jennifer Granholm also made an appearance. 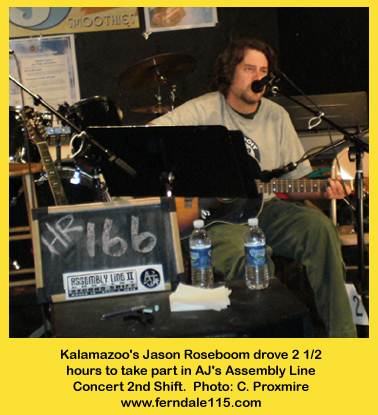 We stopped in at hour 166 to catch an hour long set of Grateful Dead covers by Kalamazoo-based folk singer Jason Roseboom, who drove two and a half hours to be part of the event.  “I heard about it last year and when word came out about the Assembly Line Theme Song Contest I wanted to get involved.  I came out to compete for that and my song got picked for their CD,” Roseboom said.  “Honestly there just isn’t much of a music scene in Kalamazoo.  There’s only two places that you can go to play, so it’s nice being able to come here.  There’s no place like AJs in Kalamazoo.”

The transition to hour 167 went smoothly, with one of the original Teen Angels, Rick Garlick, taking the stage to do good old fashioned rock and roll from the 50s.

Over 250 will have performed by the time the marathon concert is done.  The last performance will begin at 5 pm on April 1st.

“We had originally intended to extent our first effort, the current Guinness record for the longest concert, by one day.  We realized adding 24 hours would make this years concert a 312 hour continuous concert, but by merely adding one hour we can pay tribute to the city that defines our region with its people and its cars,” said O’Neil.  “We will add an exclamation point to our theme ‘we’re all in this together’.”  The area code for Detroit is 313, and O’Neil says he hopes to come up with “something good” for the record-breaking final hour.

To view any of the performances, go to http://www.assemblylineconcert.com. 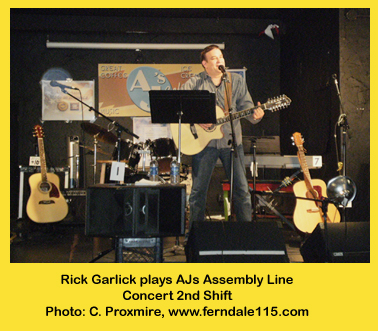