The Ferndale Chamber of Commerce and the Downtown Development Authority (DDA) are hosting a series of public meetings to help explain the current debate over building a parking structure downtown, and to give residents and businessowners a chance to ask questions about the proposed plan.

DDA Board member Jacki Smith introduced information from previous parking studies that showed a deficit of 483 parking spaces on peak evenings and 115 spaces during peak daytime hours.  On January 22, 2010 she and other DDA Board members passed a resolution stating:

“The City of Ferndale and Auto Parking Fund must address the parking deficit and parking management system to protect and sustain businesses in Downtown Ferndale, as well as improve quality of life and support economic growth for the entire City of Ferndale.

‘City Services are the first priority of our community, and the City of Ferndale must take immediate action and postpone other new bondable capital improvement projects until it plans for and resolves the parking deficit in Downtown Ferndale by providing for a minimum of an additional new parking spaces in Downtown Ferndale.

‘The DDA recommends that the City of Ferndale commits its financial resources towards the bond debt of constructing a parking structure in Downtown Ferndale by FYE [Fiscal Year Ending] 2011 to reduce the overall annual bond debt service so that the Auto Parking Fund can sustain the cost annually.”

The parking studies looked at several locations for a parking deck.  The DDA narrowed those options down and has proposed construction in the Withington Parking lot.  Another option would be to build a deck in the lot between City Hall and the Library. 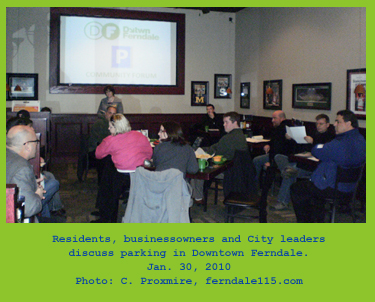 Smith said she joined the DDA so that she could get involved in the parking issue, and believes that “we need more voices in this,” she said.  “We need to protect our businesses with how many restaurants can come in to the city, and we need to create a shift in the way we think of parking.”

City Manager Bob Bruner was also on hand to answer questions and explain the parking situation from the City’s perspective.  “I don’t think anyone disagrees on the problem.  We agreed on some solutions in December, but when those agreements went to council there was a lot of concern from residents and businesses so we didn’t act on those things.”

The DDA had proposed raising money towards the new deck by increasing annual parking permits, raising the fines for parking tickets, and increasing the hourly rate on meters closest to the Central Business District (CBD).  City Council approved an increase in ticket fines from $6-$10, but postponed votes on the other proposals after several residents and business owners complained.

Bruner pointed out ways that the City has attempted to alleviate the parking problem over the past several years.  When he became City Manager in February 2007, he formed a parking committee to evaluate parking problems.  The City has increased parking rates, shifted enforcement hours to capture more revenue, adopted a payment in lieu of policy that requires businesses to replace parking spots that they use in development or pay towards the parking fund, and they have added on street parking on West Troy and Bermuda.  They were also able to squeeze in two extra spaces after re-paving the parking lot that is at the former Rosie O’Grady’s location.

Bruner acknowledged that parking is an issue, but said that “where disagreement comes in is the timetable.  Folks downtown want it addressed immediately, but the best way for the City to figure this out is as part of the 2011 budgeting process.”

The City is facing a $3-$3.5 million budget deficit for FYE 2011, and is in the beginning stages of trying to find ways to cut costs.  The budget will not be voted on until May, and Bruner feels that any decisions about parking should be discussed as part of that process.  The City is also going to be voting on a three-building municipal project that would renovate City Hall and the Police Station along with the construction of a new Courthouse that would connect to the Police Station.  Council must vote on this project before February 22, 2010 in order to keep the project bids.  The parking structure and the building project both face opposition from residents who think claim that the City should not do any new building while at the same time considering personnel layoffs.  However, the issue is complicated by the fact that employees are paid out of a general fund, while improvements are paid for with bond debt and money that the City has been setting aside for capital improvements.

Those who want to learn more about the proposed parking structure and the DDA resolution can go to www.downtownferndale.org, or they can attend one of the upcoming meetings listed above.